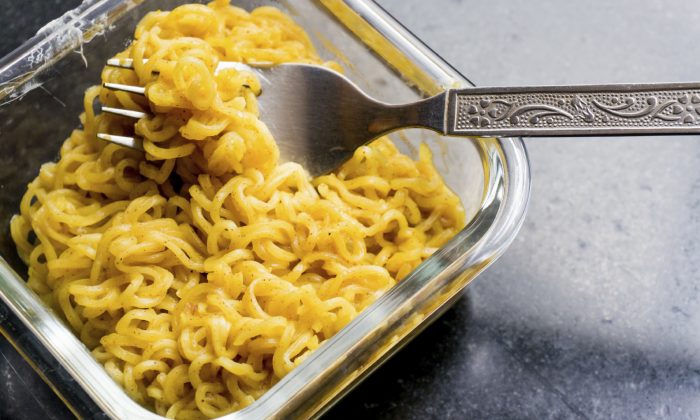 If You Eat Ramen Instant Noodles, You May Want to Reconsider It

A video has been made capturing how the body digests Ramen noodles, and it might serve as a warning to college students who rely on the cheap foodstuff as fuel.

Dr. Braden Kuo of Massachusetts General Hospital used a camera the size of a pill to capture the effects Ramen and other pre-cooked noodles have on the body.

The video showed that after two hours the noodles—which are laden with preservatives like tertiary-butyl hydroquinone—were mostly intact, USA Today reported.

“The most striking thing during the time intervals of two, four and six hours was the degree of breakdown of Ramen noodles,” Kuo said. “At two and four hours, the particular size of the Ramen noodle was much larger or formed than the homemade Ramen noodle at each of those time points, suggesting Ramen noodles were difficult to break down into extremely infinite particulate matter during the process of digestion.”

“As a full-time college student, money and time are major issues that you have to deal with and buying packages of noodles are cheap,” Macon State College senior Kristina Whitaker said. “They fill you up and are great when you are constantly on the go and have deadlines to meet.”

“After seeing this video I will definitely change how often I eat Ramen noodles,” Whitaker told USA Today. “I will try to eat them once a week or I might just stop eating them all together unless I have no other choice.”

“We don’t understand the impact to a degree of digestion, but what we do have is a striking visual image to begin the discussion,” Kuo added. “But I can’t say for certain at this point whether they [Ramen noodles] will have an impact on health or nutrition or absorption.”

In a study in medical periodical The Journal of Nutrition, women in South Korea who ate more instant noodles were more likely to suffer from metabolic syndrome.

“Although instant noodle is a convenient and delicious food, there could be an increased risk for metabolic syndrome given [the food’s] high sodium, unhealthy saturated fat and glycemic loads,” said Harvard doctoral candidate Hyun Shin, reported PreventDisease.com.

Those with metabolic syndrome can suffer an increased risk of developing heart disease and diabetes.

But if you enjoy instant noodles, just moderate your consumption.

Dr. Frank B. Hu, a professor of nutrition and epidemiology at Harvard, told The New York Times that “once or twice a month is not a problem, but a few times a week really is.”

What Marler, who has been practicing law for 25 years and owns his own firm, won’t eat might surprise you, as reported by The Associated Press.

– Unpasteurized milk or juice, also called “raw milk” and “raw juice.” “Raw milk directly from a cow can be infected with all types of bacteria,” the lawyer said. “Some argue that milk loses nutrients during pasteurization, but this is patently false. Skipping pasteurization means an increased risk of contamination by bacteria, viruses, and parasites.”

– Raw sprouts. “Raw sprouts are dangerous because of their growing process. The seeds are sprouted in standing water that can grow bacteria. There have been too many outbreaks to not pay attention to the risk of sprout contamination.” Seven outbreaks — four salmonella, two E. coli, one listeria — since 2014 trace back to sprouts, according to the Centers for Disease Control

– Meat that isn’t well done. Marler got his start in the food safety niche working for plaintiffs whose children died in the 1993 Jack in the Box E. coli outbreak. So he has no problem insisting, “Meat needs to be cooked to 160 degrees throughout to kill bacteria that could cause E. coli or salmonella.”