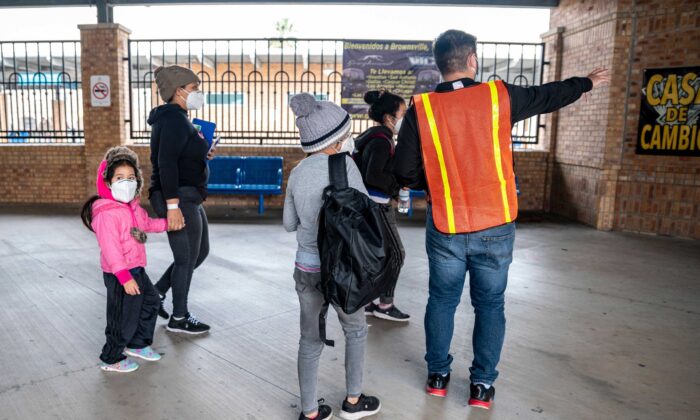 A city worker gives instructions to migrants at a bus station in Brownsville, Texas before travelling to meet relatives or sponsors on March 2, 2021. (Sergio Flores/AFP via Getty Images)
Viewpoints

If We Care About Kids, US Immigration Policy Is Not Humanitarian

Your loyal columnist is not in the habit of saying, “I told you so,” but may I remind readers about a column I wrote a few weeks ago in which I warned that the United States was in for a bumpy immigration ride ahead.

“Massive human caravans from Honduras are already headed this way,” I wrote the first of February following President Joe Biden’s 100-day ban on deportations. “Some predict throngs of Central American migrants will follow.” It was a no-brainer: If you announce to the world that your southernmost door is wide open, people will come in.

Humanitarian, you say? Nope. Let’s look at the record numbers of underaged, unaccompanied kids who are making the dangerous trek to the United States. In January, more than 5,700 kids presented themselves at the U.S. border. In February, almost 15,000 youngsters traveled at great peril in just the first two months of 2021.

Texas Gov. Greg Abbott asked the Border Patrol, “What percentage of these youngsters were coming over with the assistance of drug cartels and the answer was 100 percent,” he said. “These kids are basically trafficked here by the drug cartels.” One can only guess what these young people will do to survive here and exactly how they will pay back the cartels.

So, that’s just the situation with migrant kids. Overall, at least 178,000 migrants were processed from Mexico into the United States in January and February. That doesn’t count the 8,000 refugees Abbott told Fox News were apprehended the first week of March, nor those illegals who slipped into the country undetected. Also, some 71,000 Central Americans who had been waiting for entry via the recently dismantled “Remain in Mexico” amnesty program have now been welcomed into the United States.

Bottom line: U.S. taxpayers are suddenly supporting nearly 260,000 newcomers, some of whom were released after testing positive for COVID-19.

I worry most about the young people. Have we adults, consumed with surviving this last dreadful year, forgotten to worry about the future of our children? American youth has suffered through a depressing and sometimes suicidal pandemic year, isolated by teachers who ignore science and keep classrooms closed. And Central American children have experienced all sorts of hell in their home countries and then endured a dangerous and exhausting journey north to the U.S. border. What is to become of this younger generation?

We pride ourselves on being a humane society, but sending indigent parents in faraway lands a message that if you send your child on the journey to the United States, everything will be OK is not humane. A policy that lures desperate people to travel thousands of miles over dangerous territory and face potentially violent cartel coyotes is not compassionate. Refugee tales of rape, extortion, hunger, and death are well reported.

The political and media outrage machines like to focus on futile and divisive sidebar topics surrounding immigration. They spend time comparing past and present presidential decisions to house migrants in “cages versus containers.” They argue about whether today’s massive influx should be labeled a mere “challenge,” as the Biden administration calls it, or a full blown “crisis,” as a similar situation during the Trump administration was called by TV talking heads.

Hey, I have an idea. Instead of breathless but meaningless media coverage and imperious executive orders from the White House automatically undoing past immigration policy, how about we have a full and frank debate in this country about this ever-worsening migrant situation? Citizens surely want to know why immigration laws already on the books are ignored and why sanctuary cities are allowed to exist.

Naturally, a debate about national security issues like this should take place on Capitol Hill, but don’t hold your breath. This president has decided a fully open southern border is the way to go. And if you don’t like it, you can lump it. Is that OK with you?