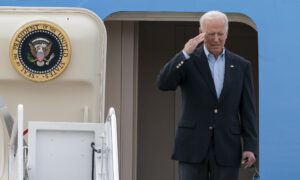 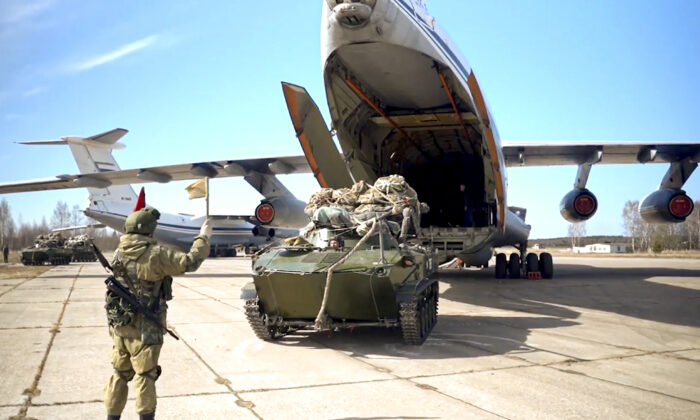 A Russian military vehicle is loaded into a plane for airborne drills during maneuvers in Crimea on April 22, 2021. The Russian military is conducting massive drills in Crimea involving dozens of navy ships and thousands of troops in a show of force amid tensions with Ukraine. The maneuvers were described as the largest since Russia annexed Ukraine's Black Sea peninsula in 2014 and threw its weight behind separatist insurgents in eastern Ukraine. (Russian Defense Ministry Press Service via AP)
Thinking About China

If Ukraine Wants Help Against Russia, Kyiv Must Stand Against China

Ukraine is in dire straits, not least because Russia invaded the new democracy in 2014 and is still there, violating its borders on a daily basis, and shooting off missiles at Ukrainian soldiers in the country’s east. So, Ukraine looks for support anywhere it can find. The United States, Britain, and NATO generally have been soft on Putin, when they should have rushed into the Ukrainian breach and helped the inspiring young country with all we’ve got. This failure of Ukraine’s democratic friends follows a sorry path in history of democracies as reluctant allies to each other when it means risking their own skin, as opposed to glittering photo shoots for politicians at alliance summits in each others’ palaces and presidential mansions. That said, Ukraine must not break ranks with its democratic supporters to such an extent that it appears to be doing the bidding of China, which is the biggest long-term threat to global democracies.

The shell-shocked Ukrainian government deserves a lot of credit. Not only is it fighting a hot war against nuclear-armed Russia, but it did initially take a stand with 40 other countries to demand more transparency on the Uyghur genocide, Tibet, and Hong Kong. On June 22, Ukraine joined the United States, Britain, Japan, France, Germany, Spain, Italy, Canada, Australia, New Zealand, Israel, and others to call for Beijing to give the U.N. human rights chief and its independent observers unfettered access to Xinjiang (East Turkistan) to investigate the genocide. But then on June 24, Ukraine backtracked and publicly stated that it had withdrawn its signature from the joint statement.

Why? China’s “vaccine diplomacy” at work.

According to the Associated Press, two Western diplomats confirmed that Beijing threatened to withhold a planned shipment of at least 500,000 doses of Sinovac COVID-19 vaccine unless Ukraine withdrew its signature. Incredibly, Ukrainian Foreign Minister Dmytro Kuleba had pushed Ukraine to purchase 1.9 million doses of China’s unproven vaccine, of which it had already received 1.2 million doses by May. Ukraine is even dosing its Olympic athletes with the Chinese vaccine, rather than better vaccines available from Britain and the United States. Only 1.2 percent of the Ukrainian population is thus far vaccinated, which surely explains Ukraine’s desperation in purchasing low-quality product from Beijing.

According to the Associated Press, Beijing’s threat to withdraw vaccines from Ukraine marks “an escalation of intense recent efforts by Beijing to push back against criticism of its rights record, this time by potentially jeopardizing health—even lives—as a way to minimize international attention to it, the diplomats said.”

One Western diplomat told the AP that Beijing’s vaccine threat was a sign of “bare-knuckles” diplomacy from Beijing. The other cited “reports of significant pressure in Kyiv,” and that “last night the [Ukrainian] delegation told us they needed to pull out.” On June 28, a British government website that included the statement still included Ukraine as a signatory country.

Without Ukraine, support for the Canadian-led statement has now increased to 44 countries. It highlights human rights abuse in Xinjiang, including “reports of torture or cruel, inhuman and degrading treatment or punishment, forced sterilization, sexual and gender-based violence, and forced separation of children from their parents by authorities,” and calls for an end to arbitrary detention of Muslims. It also mentions Beijing’s human rights abuse in Hong Kong and Tibet.

A Chinese diplomat hit back at Canada with allegations of Canadian abuse of its indigenous population. It was a typical authoritarian deflection of criticism of the present, with criticism of the distant past for which democracies have already atoned and improved their practices.

Conversely, Belarus read a pro-Beijing statement, allegedly signed by 64 countries, defending the principle of state self-determination, including apparently to commit genocide as against China’s own population in Xinjiang, or to abuse people in Hong Kong and Tibet. Belarus made the statement on behalf of a rogue’s gallery of countries, including Russia, Iran, North Korea, Syria, and Venezuela, all of which are committing horrific and ongoing human rights violations. Belarus did not provide a full list of the 64 countries publicly, or to the U.N. Human Rights Council in Geneva.

On June 26, China’s foreign ministry said Kyiv’s withdrawal of its signature “reflects its spirit of independence and respect for facts and conforms to the purposes of the U.N. Charter and basic norms governing international relations.”

“The moves of a few Western countries to interfere in China’s internal affairs, suppress and contain China and hinder China’s development under the pretext of human rights are unavailing,” said the Chinese ministry.

China’s tone-deaf state-controlled media, Xinhua, said on its affiliated social media that the United States should provide its own vaccines to Ukraine if it is so concerned about China’s vaccine diplomacy. “Or maybe Ukraine felt ashamed that it would stab China in the back while receiving support from China, and it eventually decided to change course. Ukraine has finally become clear-headed,” according to the state social media.

This isn’t the first time that Ukraine got too close to China. In November, PowerChina announced Europe’s biggest onshore wind power project for implementation in Eastern Ukraine, near Russian rebel-held territory. In 2013, China’s Xinjiang Production and Construction Corps (the notorious XPCC, which is complicit in the genocide against Uyghurs) purchased rights to 9 percent of Ukraine’s farmland (11,583 square miles) for half a century.

China has gotten too close to Ukraine as well. In 2016, China sought to buy a Ukrainian airline engine manufacturer, but apparently is getting burned, as Ukraine later nationalized the company without fully compensating the Chinese investors, who had used shell companies for the purchase (score one for Ukraine).

Given China’s failure to provide the vaccines it promised, Ukraine should claw back its rights to the 11,583 square miles of farmland it sold to China in 2013. Ukraine deserves that compensation, at least, as the pandemic is China’s fault to begin with.

Based on the failure of other democracies to live up to their commitments and stand by Ukraine in its hour of need, the country’s desperate attempts to seek support, including from Beijing, is on the one hand understandable. But in the long run, all democracies, including Ukraine, must stand much tougher against China in order to slow China’s growing global power, and the risk that it could one day dominate the world.

This means no more technology sales to China, no more purchases of questionable vaccines from China, and no more land sales to China. Don’t trust China with major wind power projects at the skirmish line with Russian rebels in Eastern Ukraine.

In exchange for Ukraine’s continued resistance to China’s expanding influence, the West should stand more stoutly with Ukraine against Russia, such as through admission of Ukraine into NATO, and much more military support for the country, including not only more defensive weapons exports, such as the Javelin anti-tank missile, but the provision of American, British, and European tripwire forces in Eastern Ukraine.