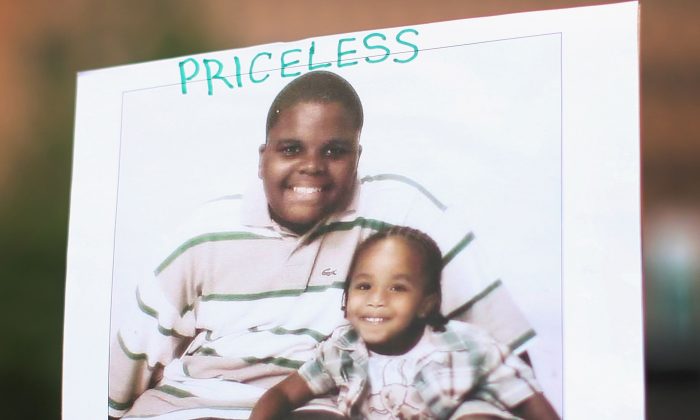 A demonstrator holds a picture of Michael Brown and a child during a protest sparked by his death, in Clayton, Mo., on Tuesday. Brown was shot and killed by a police officer on Saturday in Ferguson, Mo. (Scott Olson/Getty Images)
News

If They Gunned Me Down

If you scratch the hard outer shell of a reporter or a photojournalist, you will often find a person who cares deeply about telling the truth. You will find a person who wants to serve society. The service is accurate, unbiased information.

Most of us passionately want to offer that.

When it’s a big, emotional story, some sneaky filters can pop up.

Michael Brown’s tragic, too soon, awful death is such a story.

According to his father, he was a smiling, funny, silly peacemaker. After a police officer shot him dead on the street in Ferguson, Mo., on Saturday, news agencies picked up from his Facebook page and published a stern-faced picture of Brown making a sideways peace sign.

I read some speculation that the gesture was a gang sign. So I fact-checked.

Here is what The Urban Dictionary says about it:

So it’s a respectful greeting or goodbye, a nonoral way of saying ciao or aloha. Not a gang sign.

This is the kind of thing the people who started #IfTheyGunnedMeDown want others to understand. If They Gunned Me Down is a Twitter process in which black people tweet two pictures of themselves.

For example, one man juxtaposed himself resplendent in his Marine Corps dress uniform with himself in a T-shirt and knit cap, sneering. A young woman tweeted herself beaming in academic robes upon her college graduation with herself in shorts before a casual party. The idea is to ask, which of those images would the press choose to run if the subject died in a police shooting?

Kelly McBride of the Poynter Institute journalism school in Florida wrote, “Underneath the #IfTheyGunnedMeDown commentary is a request that we be more nuanced and flexible in our storytelling.”

Her fellow Poynter faculty member Al Tompkins wrote, “It is possible for an image to be accurate, real and unaltered and still not be a true depiction of who that person is. A booking photo could be a single image of a person at the worst moment of his or her life. A wedding photo could be that same person at the best moment of his/her life. Both are extremes. Seek context.”

It matters. Blindly following the habitual filters can make things worse in the real world.

“Unfortunately, research suggests that media coverage of these tragedies may actually cause white Americans to be more afraid of young black men and to support harsher policing, such as stop-and-frisk,” stated Travis Gosa, a professor of Africana Studies at Cornell University, in a university release.

“Awareness of racial inequality doesn’t seem to motivate white Americans to support policies that address police violence—it can have the opposite effect, while media reports of blacks rioting and looting can reinforce stereotypes of black criminality.”

Speaking of rioting and looting, browsing the Twitter feed about Ferguson led me to one image that contradicts the looting and rioting narrative. With the title “This, too, happened today,” and the hashtag #Ferguson, a photo shows volunteers with shovels and brooms, about to clean up a burned-out Quick Trip. I understand it went viral.

That volunteerism and the many quiet and nonviolent vigils and gatherings in response to Brown’s death are important. His parents, his neighbors, and his president called for calm.

All of us should report in a way that contributes to calm, and does not worsen stereotypes.

That includes stereotypes about police. The local police department does need to be more transparent. It plans to release the name of the officer who shot Brown within 48 hours, it announced.

Justice and sorting out the truth will take time. As Attorney General Eric Holder stated on Monday, about the investigation into Brown’s death, “Aggressively pursuing investigations such as this is critical for preserving trust between law enforcement and the communities they serve.”

We in the media need to take our time too, and be careful about giving each story a full context.