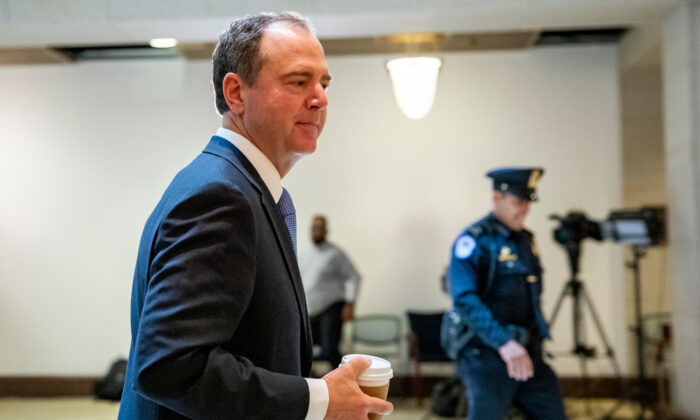 If There’s Nothing to Hide, Schiff Should Testify Under Oath

House Republicans recently indicated that they intend to call Rep. Adam Schiff (D-Calif.) as a fact witness in the House’s ongoing impeachment inquiry.

While that’s unlikely to succeed based on the terms of the recent resolution, Schiff’s testimony could serve to derail, or to seriously undermine, the House’s unrelenting quest to impeach the president based on his call with the Ukrainian president.

While it’s unusual for members of the House to call one of their own as a witness, the facts and circumstances in this case compel House Republicans to do so. By way of review, the original whistleblower in the Ukraine matter filed a complaint without any firsthand knowledge of the alleged events. He also failed to check off the appropriate box indicating that he had met with one or more members of the House Intelligence Committee’s staff, and he concealed these interactions from the Intelligence Community Inspector General.

This omission is highly relevant, because the whistleblower apparently had contact with a member of Schiff’s staff before filing the complaint. As such, Schiff, who is leading the impeachment inquiry, allegedly already had knowledge of the complaint (or the contents thereof) before it became public. In fact, Schiff sent out a tweet on Aug. 28 that mimicked the allegations in the whistleblower complaint before the complaint was made public.

These contentions, if true, should compel Schiff’s testimony, as should the fact that he previously claimed that “we have not spoken directly to the whistleblower.” While one of Schiff’s aides tried to explain the contradiction, the explanation was far from convincing. Schiff must answer questions, under oath, in order to clarify these apparent inconsistencies.

Schiff should also willingly testify, because his testimony is relevant in several respects.

Tangentially, Schiff’s testimony is necessary in order to gauge his credibility and any potential bias. This is especially true in light of his apparent prior inconsistent statements. For example, Republicans would undoubtedly want to ask Schiff why he failed to disclose his staff’s initial meeting with the whistleblower and why his Aug. 28 tweet mimicked the allegations in the complaint before it had even been filed.

It makes perfect sense for Schiff to testify, under oath, about his conversations with the whistleblower, as this testimony would promote transparency and better lead to the discovery of the truth. Given that Schiff willingly made himself a fact witness, would his refusal to testify constitute “obstruction” of the impeachment inquiry, as he likes to say?

There’s no compelling reason why Schiff should refuse to testify. In fact, there’s precedent permitting him to testify. Specifically, in 2017, former Rep. Dana Rohrabacher testified in front of the Senate Intelligence Committee about his meetings and trips to Russia as part of the panel’s investigation into Russian election meddling. Rohrabacher testified even though he was a member of Congress.

Schiff should follow suit. Clearly, his alleged decision to inject himself into the investigation at a very early stage was unwise. In doing so, and in light of his utter dislike of the president, Schiff became an adverse fact witness who should now have to answer questions about his alleged involvement.

As the committee chair, Schiff should encourage and promote transparency. To do so, he must testify and answer the undoubtedly difficult questions that Republicans will rightfully pose. He shouldn’t be permitted to evade questioning merely because he is overseeing the impeachment inquiry. In fact, if he played an improper role in the decision to initiate the Ukraine “farce,” as Trump’s personal attorney Rudy Giuliani termed it, he should step down as chairman, given the inherent conflict and his obvious bias.

The American people want to hear the truth. Toward that end, Schiff, his aides, and the whistleblower must testify under oath (there are circumstances under which a whistleblower doesn’t have a right to secrecy, such as if his/her allegations are untrue). If they’re telling the truth, there’s nothing to hide. If, on the other hand, they are not, this, too, will be exposed.

The decision is Schiff’s to make. The eyes of an entire nation are watching and waiting.