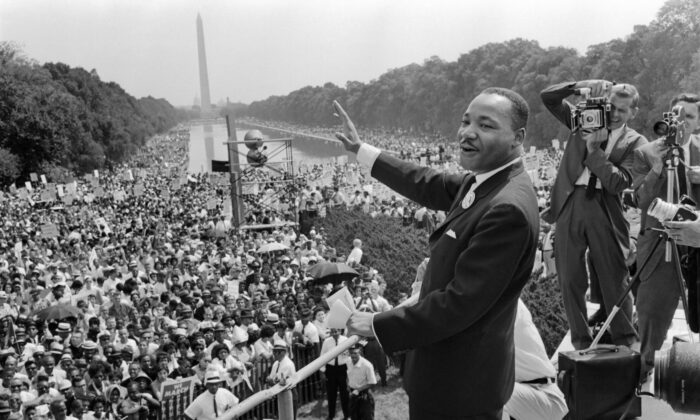 Can there be injustice if there’s no truth?

Martin Luther King Jr. considered this question in his powerful letter from Birmingham Jail (1963). He was responding to fellow members of the clergy who opposed segregation, but rejected civil disobedience, which involved breaking the law. His central point was that laws may be just or unjust. We have a duty to obey just laws and to oppose, or even defy, unjust laws. We need to recognize that both kinds exist and learn how to tell the difference.

Referring to the examples of Nazi tyranny under Hitler and the 1956 Hungarian revolution against communist tyranny, King wrote:

“We should never forget that everything Adolf Hitler did in Germany was ‘legal’ and everything the Hungarian freedom fighters did in Hungary was ‘illegal.’ It was ‘illegal’ to aid and comfort a Jew in Hitler’s Germany. Even so, I am sure that, had I lived in Germany at the time, I would have aided and comforted my Jewish brothers. If today I lived in a Communist country where certain principles dear to the Christian faith are suppressed, I would openly advocate disobeying that country’s antireligious laws.”

King gave examples—from the Bible, the martyrdom of early Christians, and the Boston Tea Party—of the refusal to submit to unjust laws.

Like the American Founders and the Declaration of Independence, King didn’t seek to abolish the rule of law, but to appeal to it. King saw, as Thomas Jefferson did, that it wasn’t enough to define law as whatever the sovereign power declared it to be. He saw, as did the Founders, that law defined as such provides no constraint on tyrants who want to reduce it to a matter of their own will and power.

So what distinguishes a just law from an unjust one?

In addressing this question, both King and the Declaration of Independence drew on a classical tradition that perceives law as rooted in objective reality, in the way that things are. It’s a tradition at least as old as Aristotle. King cited St. Augustine as stating the principle that “an unjust law is no law at all.” He cited St. Thomas Aquinas as teaching that “an unjust law is a human law that is not rooted in eternal law and natural law.”

In a similar way, the Declaration of Independence appeals to “the laws of nature and of nature’s God.” It bases itself on truths that it holds to be self-evident and affirms inalienable rights that are endowed by the Creator, rather than conferred by the state or sovereign:

“We hold these truths to be self-evident: That all men are created equal; that they are endowed by their Creator with certain unalienable rights; that among these are life, liberty, and the pursuit of happiness.”

No Truth, No Injustice

For some modern people, such appeals to truth or reality seem intrinsically intolerant, since your truth is different from my truth. We see a radical relativism pervading law, education, and media that turns out to be anything but tolerant. It’s not enough to accept that I have the right to proclaim my belief, however absurd, illogical, or contrary to the very nature of the human person or species it may be. It’s not enough that you tolerate it: You must now endorse it with all the visible enthusiasm of a Communist Party Central Committee member applauding the statements of the Dear Leader.

Relativism is the ideology of tyrants. For Stalin and Hitler, history was on their side, victory was inevitable, and anyone who questioned their version of the truth was objectively an enemy of the state. “Truth” itself was a matter of the will and power of the ruler. If the outcome of their policies and edicts wasn’t what they promised, it wasn’t because they contradicted reality or the givenness and constraints of life. It was because enemies, within and outside of the ruling party, conspired to sabotage the program.

In the United States, we see such an unconstrained vision of reality, not in the full-blooded totalitarianism of a Stalin or a Hitler, but in the growing denial of reality itself. It’s a rejection of democratic processes, a refusal of argument or debate, and the censoring or suppression of speech or even of plain information, in the media and on campuses. Those who bravely speak up for truth and against injustice are more likely to face hateful mobs on Twitter than Red Guards or Brownshirts in the street.

Retired Supreme Court Justice Anthony Kennedy often accompanied his most aggressive judicial activism with rhetorical flourishes about the right to make up our own reality. The rhetoric was a sign that Kennedy was going to ignore the Constitution and impose his own views in place of democratic political and legislative processes.

In the Casey abortion decision of 1992, Kennedy famously declared, “At the heart of liberty is the right to define one’s own concept of existence, of meaning, of the universe, and of the mystery of human life.” Ed Whelan of the Ethics and Public Policy Center translated Kennedy’s words: “We justices have the unbounded authority to decide which matters you yahoo citizens should be prohibited from addressing through legislation.”

Kennedy’s purple prose signified in practice the inauguration of decades of the legalized killing of the vulnerable and innocent on an unprecedented scale, the denial of reality, and repudiation of the right to life of a whole class of human beings, the most vulnerable among us.

Transgender identity ideology appears in this light as an extreme case of truth-denying as a requirement for participation in polite society. The absurdity and incoherence of the claims that are being advanced as scientific by this quasi-religious pseudoscience, along with the catastrophism and zeal of adherents (you must accept my self-diagnosis or you will kill me; saying that is committing genocide) suggests that a fringe cult of extremists are behind the ideology. The numbers who identify as trans is small, even allowing for the craze among teen girls in the United States and the UK. But the rapid embrace of the ideology in left-liberal parties, professional bodies, media, education, libraries, and the bureaucratic state has been extraordinary, and this despite the irreversible damage done to young people, their bodies, and their family relationships.

Live Not by Lies

Communism and Nazism both accept a relativism that reduces “truth” to a matter of will and power, while seeking to impose their own truth on others. They’re obviously tyrannical, if not totalitarian. But we see the same tendencies in ideologies and movements promoted by Western elites that deny objective truth and seek to suppress free speech, open debate, and democratic decision-making.

The tyranny of radical relativism is one of its paradoxes. It denies the very existence of objective reality while insisting on its own truth.

Must we surrender to this bullying out of fear that speaking the truth will elicit enraged Twitter mobs demanding that we be canceled, fired, refused admission to the college or job of our choice, or deplatformed from speaking engagements or denied future employment?

The witnesses of those who have survived the severest persecution in our times, under Nazis, communists, or the Jihadi terrorists of ISIS, offer an answer. Whether the surviving victims were Jews or Christians, the victims of slavery or religious persecution, they always insisted on the ultimate importance of telling and hearing the truth about what happened on the ground. The perspectives of concentration camp guards and their victims in the Holocaust were different, as were those of Christians in communist Eastern Europe and the agents of state repression who persecuted them.

To say this isn’t to assert that there’s only one true narrative of an event or that accusers must always be believed. The ruin of many lives and reputations by a pedophile fantasist, Carl Beech, whose false allegations led British police to conduct a sweeping historical sex abuse investigation (2014–2016), should give us pause before adopting the then-fashionable mantra “believe all victims” or junking due process and the assumption of innocence. Years later, in 2019, Beech was convicted on multiple charges of perverting the course of justice and one charge of fraud. He was sentenced to 18 years in prison. His false allegations against prominent individuals, some no longer living, led to a disastrously flawed investigation and immense damage to those he accused and their families, while discouraging true victims of abuse from coming forward.

Justice can be perverted or denied by false allegations: by the failure to take real victims seriously (as happened notoriously in Rotherham in the UK over several decades, where authorities failed to act on reports of actual sex trafficking and organized child sexual abuse) and by victims’ fear of retaliation if they speak the truth—there were an estimated 1,400 victims in Rotherham, many of whom weren’t believed.

The point is simply that justice depends on recognizing the real, objective nature of truth (beyond what the state or party or leaders says it is at the moment), establishing the truth of the matter, and then telling it (or at least not lying about it), even when the cost of truth-telling is high in terms of job security or, in these days of doxxing, in terms of the risk to one’s family. It’s the priority of those who have witnessed such horrors as the Russian Gulag or the Nazi concentration camps. It should be ours as well. Without truth, there can be no injustice and hence, no justice.