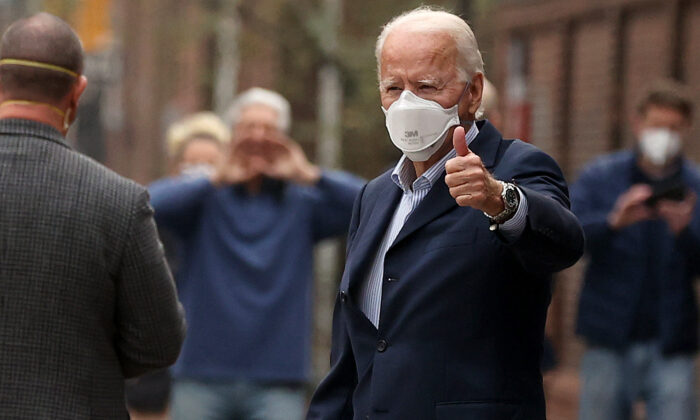 If There Is a President Biden, Don’t Expect to See Him Around for Long

Several times during the election season, I noted that no matter who was said to have won the presidential contest, there never would be a President Joe Biden, not really.

There were basically two reasons there would not be a President Biden, except, very briefly, in some strictly nominal sense.

The first reason is that Joe Biden is an empty cipher. He’s a drowsy Howdy Doody puppet, manipulated by a committee of “woke” ventriloquists.

They picked Biden out of the primary lineup because he seemed the least threatening and most pliable. Biden promised “normality” after the brashness of President Donald Trump.

Biden’s painfully obvious flirtation with senility was as much an asset as a liability, because, though it made for some cringeworthy displays of incompetence, it conspired with COVID-19 to allow his handlers to keep him tucked safely away in his basement for most of the campaign.

Writing for The Epoch Times in August, I compared Biden to the aged Achon, a character in Evelyn Waugh’s novel “Black Mischief.”

Achon, the legitimate emperor of the fictional kingdom of Azania, had been safely confined to a cave for 50 years.

After some elaborate negotiations among the real powers of state, Achon is set free and is carried to the capital to be invested as emperor. Alas, his long captivity left him bent and senile. He dies upon coronation.

Waugh didn’t record whether his last words were “Come on, man.”

Who knows whether Joe and Jill will actually move into 1600 Pennsylvania Avenue come Jan. 20. Maybe they will.

It would be interesting to sit in on his first meeting with Jake Sullivan, the man Biden wants to be his national security adviser.

Sullivan recently disclosed that the “Big Guy” asked him to “reimagine national security” to include “the pandemic, the economic crisis, the climate crisis, technological disruptions, threats to democracy, racial injustice and inequality in all forms.”

I’m sure that will amuse the Chinese, as much for the fact that they didn’t make the list of concerns as for the many fatuous items that did.

I hate to introduce a discordant note into this green dream of perfect wokeness, racial inclusivity, and mandatory readings of Harrison Bergeron, but the current director of national intelligence, John Ratcliffe, has a different list of national security threats.

“It is that the People’s Republic of China,” he wrote, that “poses the greatest threat to … democracy and freedom world-wide since World War II.”

It appears that when Biden thinks about China, he thinks about that Chinese officemate that his son Hunter lined up for him.

The mention of Hunter Biden brings me to the second reason that Joe Biden’s tenure as president, if it happens at all, is likely to be merely nominal.

Many people wonder why Biden picked, or agreed to, Kamala Harris as his running mate.

With the possible exception of Elizabeth Watch-Me-Drink-a-Beer-With-My-Hubby Warren, Harris was the least popular of all the Democrat candidates for president. She was from a state that anyone with a “D” after their name would carry. She had no national following.

So why pick her? Sex and race were part of it, of course, but there are plenty of other half-black females parading around.

I think Harris was chosen because she was an eager disciple of the left flank of the Obama-Clinton coalition. It is they who have defined the Biden profile. And it is they who would staff his administration, assuming he has one.

But have you noticed the sudden flurry of attention to Hunter Biden and his travails?

There’s all that money—millions and millions—that had been shoveled to him and his family for … for what? For meetings with “the Big Guy,” i.e., dear old dad.

We knew all this before the election. But the media dismissed it when they didn’t actively censor it.

“Just drag Biden over the finish line. Then, we’ll talk.”

Well, he is almost over the finish line now. Maybe he’ll have a chance to put his hand on the Bible and recite the oath of office.

But it will not be long, I predict, that a reason will be found to cut him loose.

Maybe people will start noticing all the things he doesn’t notice and sound the alarm: “Hey, he’s president of the United States! He can’t remember what day it is!”

Or maybe “grave concerns” will be raised about all the nefarious revelations that are lurking on Hunter’s hard drive.

One way or another, it will be President Harris before you can say “Paris Climate Accord” or “Let’s Not Be Beastly to the Chinese.”

I thought the Dems were pretty cynical when they nominated Biden in the first place. I suspect that I didn’t know the half of it.