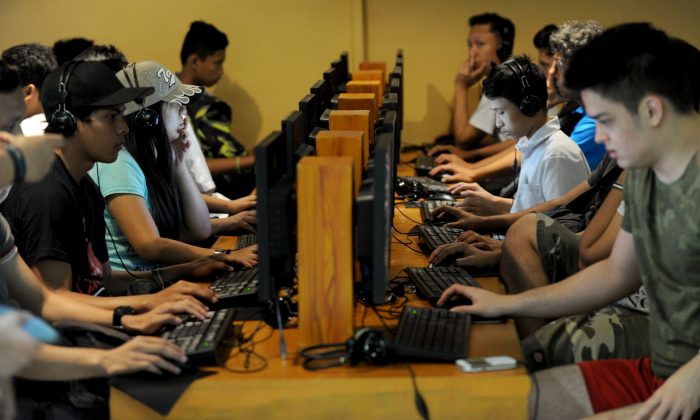 Filipino youths sit in an Internet cafe in Manila on Feb. 18, 2014. The Philippine Supreme Court ruled that a controversial cybercrime law penalizing online libel is constitutional, amid claims it is intended to curb Internet freedom in one of Asia's most freewheeling democracies. (Jay Directo/AFP/Getty Images)
Opinion

If the Web Wants Rules, Who Will Make Them?

Web founder Sir Tim Berners-Lee wants an online “Magna Carta” to protect and ensure the independence of the Internet.

He’s also created a Web We Want campaign, calling on people to generate a digital bill of rights—a statement of principles he hopes will be supported by public institutions, government, and corporations.

The new Magna Carta would deal with issues of privacy, free speech, and anonymity, among other things.

The Magna Carta itself is perhaps not the best historical precedent. While it is the foundation of many modern freedoms, it contained clauses that look discriminatory to modern eyes.

For instance: “No one shall be arrested or imprisoned on the appeal of a woman for the death of any person except her husband.”

It is important to understand the historical context of the Magna Carta. The monarchy had absolute power. Feudal landowners were attempting to diffuse the absolute power of the monarchy—largely unto themselves.

Who Rules the Internet?

The Internet has long been characterized by its very lack of centralized authority. This is not to say that some corporations, such as Google, and some governments, such as that of the United States, do not exercise significant influence over all aspects of its usage.

On the Internet, the “kings” (global giants of commerce and advertising) have taken control over various aspects of the Internet (often with our implicit consent), but they do not hold power by divine right. The Magna Carta was about what absolute power the barons could take back; the Internet is about what powers we insist on retaining.

This does not itself undermine Sir Tim’s project, which builds on the lasting positive impacts of the Magna Carta rather than its historical peculiarities, but it does foreshadow some of the difficulties likely to arise in deciding exactly what is the “Web we want.”

This ought not to be about handing power from corporations and governments to today’s equivalents of the feudal barons. The feudal barons were a very homogeneous group; they did not represent the interests of everyone or even everyone in England. Similarly, it is not clear whether those participating in Sir Tim’s campaign will truly represent the global Internet community.

What Do We Want of the Web?

Consider the notion of “anonymity.”

Others, such as U.S. columnist Farhad Manjoo and The Daily Telegraph, argue that “trolls” ought to be held accountable for threatening or offensive comments.

There are complex debates about how freedom of speech ought to be balanced against other values, such as a collective right of minority groups to be free from racial vilification and offensive speech.

You may have different positions on anonymity depending on whether you are expressing a political view online, or being subjected to vitriol (such as TV celebrity Charlotte Dawson), threats or libel.

Interestingly, the Web We Want campaign itself asks subscribers to confirm registration with “your real name,” presumably in order to preserve integrity.

Anonymity can be a positive or negative, depending on context and personal values. There may be ways to balance these perspectives, and amendments to the Australian Privacy Act, recently in force, attempt to do this. But it’s unlikely that any single solution would work for all people at all times.

Whose Rules Get to Rule

The difficulty Sir Tim’s proposal faces is that there can be no single vision of the “Web we want.” This is true within internally diverse countries such as the U.K. and Australia and is certainly true among the wider international community.

At most, there might be the “Web the majority of people wants at a given time” but to work out what that is requires more than a debate among those who self-select to join Sir Tim’s campaign.

Sir Tim calls for an “open, neutral” Web. It is hard to disagree—who would want the World Wide Web to be closed or biased?

But use of positive language does not itself answer the question. To quote the former U.S. historian Melvin Kranzberg and the first of his six laws on technology: “Technology is neither good nor bad; nor is it neutral.”

We should be aware of the form the Internet is taking, the features it manifests, and the positive and negative implications of those features for us personally, and for communities.

But we should not pretend that there is a single agreed list of desirable features, or that there is such a thing as a “neutral” World Wide Web. There is no agreed-upon neutral position among the world’s diverse users and potential users of the Web.

The real question is how we go about enabling conversations about the impact of public and private choices that, together, shape the Web. These conversations need to take account of diverse languages, diverse perspectives, and diverse cultures. In this respect, the Magna Carta is a poor precedent.

Yet it is only after such conversations take place that can we begin to think about whether it is possible to design a universal constitution for the Internet.