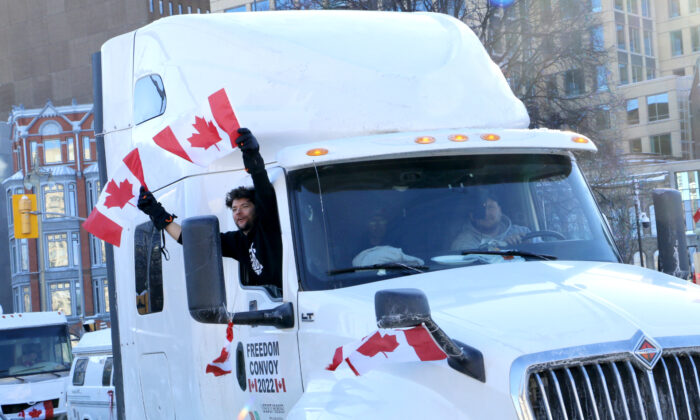 A man waves Canadian flags out of a truck in downtown Ottawa on Jan. 29, 2022, as part of the Freedom Convoy protest. (Noé Chartier/The Epoch Times)
Viewpoints

If the Canadian Left Purports to Support the Working Class, Why Didn’t They Support Trucker Convoys?

Since the 1900s, the coming together of workers in a powerful way in order to demand greater rights has been seen as a positive thing by “the left.” This includes the right to work, “to pursue the gaining of a livelihood,” as reflected in the Canadian Charter of Rights and Freedoms. The Dominion Labor Party, United Farmers of Alberta, Progressive Party of Canada, Co-operative Commonwealth Federation (CCF), and the New Democratic Party (NDP) all supported powerful unions along with strikes and protests.

Farmer-labour parties supported the Winnipeg General Strike of 1919, where a number of people died.

The CCF supported the On-to-Ottawa Trek characterized by Prime Minister R.B. Bennett as “not a mere uprising against law and order but a definite revolutionary effort on the part of a group of men to usurp authority and destroy government.” Bennett met with eight trek leaders when they came to Ottawa, though they weren’t offered seats.

During the 2022 Freedom Convoy protest, on the other hand, the Canadian left abandoned its historic role as working class champion. The trucking industry warned Ottawa that imposing the vaccine mandate on truckers who drove alone across the border—for a vaccine that didn’t prevent infection or stop transmission—would create chaos and sideline tens of thousands of truckers and their supporters. Once the mandate was imposed, it catalyzed a convoy protest headed to Ottawa. Protest leaders wanted the government to account for its policy and have a public debate with those most directly impacted.

The NDP has a long history of taking corporations to task for various harms, such as damage to the environment and making people sick. Yet the NDP was AWOL when it came to offering any scrutiny of corporate assurances of safety and effectiveness by a pharmaceutical industry that has been criminally fined over US$87 billion since the year 2000.

The Wall Street Journal noted in an editorial, “Instead of finding ways to diffuse this tense situation, (the) approach was to throw more gasoline on the fire. The absentee Prime Minister would infrequently grace the nation with his presence to mock and smear his opponents.”

“I was in the House during 1988 debate on the Act, when we were promised that ’emergency powers can only be used when the situation is so drastic that no other law of Canada can deal with the situation.’ That test has not been met. The NDP can stop this. Will they?”

His view wasn’t echoed by any NDP caucus member in 2022.

In October 1970, NDP leader Tommy Douglas, while agreeing that the FLQ kidnapping was serious, told Parliament the government had the option “to deal with it [FLQ Crisis] under the powers which it now has under the laws of Canada. … There are very considerable powers there. I think the government deserves some criticism because some of those sections have not been used.”

The same could be said for the considerable powers the government had at its disposal, in  February 2022. Yet, the NDP endorsed invoking the Emergencies Act even before it was debated. It was part of the hysteria initiated by the prime minister warning Canadians about sedition, a coup.

Nevertheless, cabinet ministers held press conferences steps away from the protest. Senator Denise Batters and others attested to the peaceful, safe environment she and other senators felt when walking through the groups of protesters.

Ultimately, on Feb. 12, Ottawa and convoy leaders reached an agreement, and trucks began to move out of the residential areas. Still, the Emergencies Act was invoked, not out of necessity but by choice.

The convoy protests have revealed a growing class divide in Canada. It accompanies a huge disconnect between the left and the working class, those they purport to represent.

Canadians who are in the email jobs caste have been able to carry on with Zoom meetings and work from home, while bricks and mortar workers have lost jobs and income as a result of the pandemic measures. Consequently, the two cohorts of the left—the activists and the workers—are experiencing a schism.

A return to championing peaceful, non-violent protest–which the noisy but legal Ottawa convoy demonstration was—and consultation with workers about policies that directly impact their livelihoods are a path forward for the left. Obviously, the left should clarify that the convoy protest was not about terrorism and was not an insurrection. Going forward, they should ensure that the Emergencies Act is a last resort of a desperate government, and not the first act of a government that is overly bothered by dissent.

Ray McGinnis
Follow
Ray McGinnis is a writer, and author of Unanswered Questions and Writing the Sacred. Earlier in his career, Ray was a program staff in education for the United Church of Canada, serving in several congregations, as well as at the denominations national office (1986-95). This content was provided by the Frontier Centre for Public Policy.