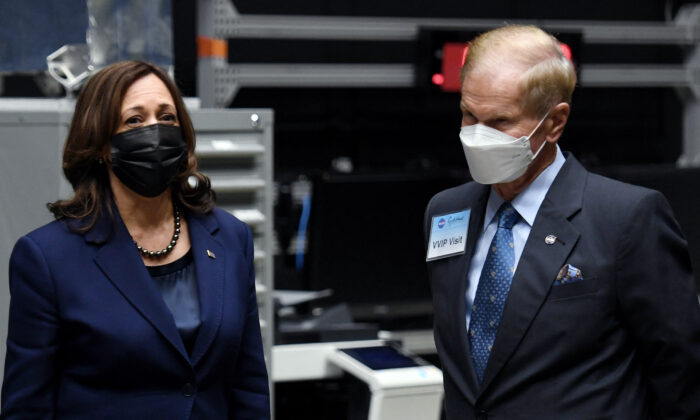 If She Does Her Job as NSpC Chair, Kamala Harris Can Still Save the Free World

U.S. Vice President Kamala Harris can secure freedom for Americans and their allies by simply exercising much needed leadership as chair of the National Space Council (NSpC), an advisory body to the White House.

In selecting his vice president to serve as the NSpC chairperson, President Joe Biden honored the precedent started by George H.W. Bush and continued by Donald Trump.

Former Vice President Mike Pence used his term as NSpC chair to promote Trump’s revived goal for the United States to return to the moon, and even accelerated that goal to 2024.

As chair of the NSpC, Harris can make her most decisive contribution to literally save the free world: elevate U.S. policy priorities that prevent China from dominating the moon.

China’s moon program is accelerating. In 2024 or 2025, China could start testing its new Long March-5DY space launch vehicle (SLV), two of which will be used to send a manned space capsule and then a moon landing vehicle, to rendezvous in moon orbit before the latter descends to the surface.

The danger here is that the U.S. goal of reaching the moon has lapsed from 2024 to 2025 and perhaps later, while China’s previous goal of putting people on the moon on 2030 was moved one or two years earlier.

Further U.S. delay means that China could score two victories. First, it could win the “second moon race,” which in contrast to the first one, is all about controlling the key moon resources and strategic positions.

For the Chinese Communist Party (CCP), control of the Earth-moon system is crucial to establishing political, economic, and military hegemony on Earth.

No one nation can dominate conflicts on Earth without exercising control over low-Earth orbit (LEO) to ensure the viability of communications and surveillance satellites.

But increasingly, control of cis-lunar space—the region between the Earth and the moon—and then the moon itself, will be crucial to controlling LEO.

A second victory would be China building a dominant position on the moon. As indicated in a Nov. 26, 2020 article by state-controlled China Daily, China may start producing 10 Long March-9 SLVs annually from 2030 to 2035. The rocket can put 50 tons into trans-lunar injection (TLI), or transport to the moon.

That would be 60 Long March-9 SLVs—basically as large as the former U.S. Saturn-5 SLV that put U.S. astronauts on the moon in 1969. Forty of these super-heavy SLVs might be enough for China to begin building up to 10 bases on the moon.

In a Dec. 29, 2021 article by Chinese tabloid Global Times, Russia’s Roscosmos space agency indicated that China and Russia could build a manned moon base by 2035–but this could happen earlier.

By the 2030s, nuclear space propulsion could also begin to halve the time needed to reach the moon and Mars. Space laser communications could make possible the Earth-based control of large lightly manned or unmanned resource extraction, processing, and production facilities on the moon.

Humanity should be benefitting from the beginning of a new “space economy” with no bounds. But that will not happen should China dominate the moon—as Beijing will increasingly seek to restrict access by the democracies as it uses the moon as a base for dominating Earth LEO and restricting access to Mars.

Should China be close to gaining hegemony on Earth, control of the Earth-moon system would help the Chinese Communist Party (CCP) to ensure that any remaining democracy—perhaps the United States—cannot rebuild the strength via access to space resources, to preserve its freedoms and then challenge the CCP’s hegemony on Earth.

There are many reasons why China is on course to becoming the new hegemon on Earth and of the Earth-moon system, but the most important reason is the hubris of former President Barack Obama.

In an April 15, 2010 speech in which the current National Aeronautics and Space Administration (NASA) director, then Senator Bill Nelson, was present, Obama announced his termination of the Constellation moon exploration program of his predecessor George W. Bush.

Justifying his decision, Obama stated: “We’re no longer racing against an adversary. We’re no longer competing to achieve a singular goal like reaching the Moon. In fact, what was once a global competition has long since become a global collaboration.”

But a decade later, it’s clear that China is racing the United States to dominate the moon, while Russia has decided to cooperate with China in populating the moon. Russia also seeks to terminate its partnership with the United States on the International Space Station, as it now joins with China to threaten wars in Europe and Asia.

George W. Bush’s Constellation Program was in part motivated by concern that China was seeking to dominate the moon. But nearly 20 years later, America is in real danger of losing the new race for moon dominance to China.

Harris should correct Obama’s mistake—both as chair of the National Space Council and in her capacity as a policy advocate—by focusing attention on the requirement for NASA to devote the attention and resources to ensure that NASA’s now five-year late Space Launch System (SLS) super-heavy SLV returns Americans to the moon by 2025.

Harris can also urge private U.S. space companies like SpaceX and Blue Origin to complete their respective “Starship” and “New Glenn” super-heavy SLVs so as to give the United States additional means to rapidly build its presence on the moon.

Should Elon Musk’s “Starship”—which he plans to launch into Earth orbit in early 2022—validate its performance, then the United States should consider purchasing 10 of these rockets.

This will help subsidize their further production while also giving the United States an early edge in moving cargo to the moon so as to deny dominance to China, and to project strategic cargos to the other side of the Earth in less than one hour.