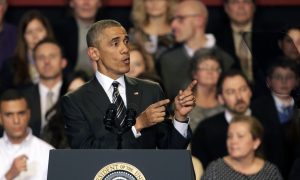 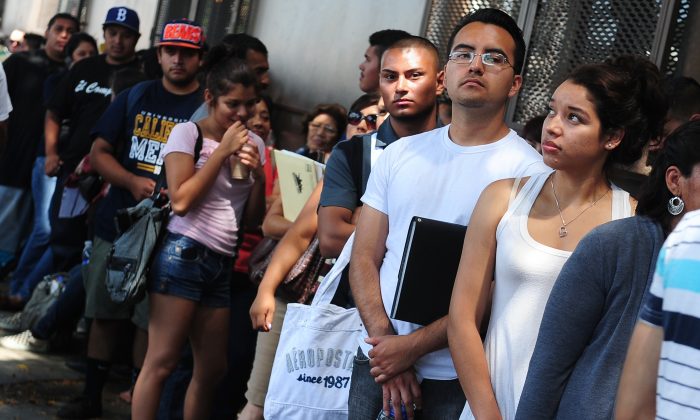 Young people wait in line to enter the office of The Coalition for Humane Immigrant Rights in Los Angeles on Aug. 15, 2012. (Frederic J. Brown/AFP/GettyImages)
US

If Obama’s Immigration Programs Get Axed, What About the 700,000 Expecting Protection?

If the Republicans’ quest to kill President Barack Obama’s Executive Orders on immigration works, the question arises of what happens to the over 700,000 illegal immigrants who already applied for Obama’s programs and expect to be protected from deportation.

The Senate voted twice this past week on a bill that would defund the Executive Orders. Orders that would allow millions of illegal immigrants to stay in the country and grant them work permits. The Senate Republicans lack the necessary 60 votes to overcome Democrats’ filibuster to pass the bill. But the GOP can block funding for the whole Department of Homeland Security (DHS). That would partially defund the president’s orders as well.

If the DHS runs out of money on Feb. 27, what happens with the people who already applied for Obama’s 2012 program or are about to apply for his new program announced last November? And speaking more broadly, what will happen to applicants if the powers that be in government swing against them?

Put bluntly, could the Immigration and Customs Enforcement (ICE) use the address submitted on an application to come knock on their door and put them on a plane home?

The short answer is yes.

Obama’s executive orders create a program called “deferred action.” In theory, that labels someone as not a priority for deportation. In practice, it prevents deportation for two to three years and allows applicants to work. When the two- to three-year term expires, the illegal immigrants can apply for a renewal.

Over 700,000 people had applied for the program by the end of September (the last month with available statistics), DHS data shows. Another 5 million are estimated to still be eligible.

Those who already received their deferrals are safe, even if the program shuts down. But that’s not the case for those about to apply or for anyone who is in the middle of the application process. Over 150,000 people had pending applications as of the end of September.

When an applicant’s deferral expires or when their applications are pending, the department is free to use their data to find and deport them, according to New York Law School Professor Lenni Benson, who specializes in immigration law.

The department would only share the data with ICE “for purposes other than removal,” a DHS spokesperson stated in an email response.

But that is not a legal protection, only an internal DHS guideline, Benson explained. If the administration wishes to change the guideline, nothing stands in its way.

“It can be used,” Benson said. “But I don’t think it’s likely to be,” she added immediately.

The reason is the DHS just doesn’t have enough capacity to target so many people.

“Even if the government begins to act on them it would take years,” Benson says.

The department spends over $8000 to deport a person so it’s financially impossible to deport everyone. Thus, even without Obama’s orders, DHS has it’s criteria to judge who is a priority for deportation and who’s not.

The department spends over $8000 to deport a person.

Obama’s orders apply to anyone who arrived in the United States before 2010 if they were under 16 at the time. If such a person hasn’t committed a crime or is not in the middle of deportation proceedings already, he or she is probably not a priority for deportation, Benson said.

Still, the next administration may set different priorities. If it would simplify deportations and pour enough money in the system, the turn may eventually come for beneficiaries of Obama’s order.

Also, the main crux of Obama’s November order is to start a program in May that would give deferrals to some 4 million illegal immigrants who are parents of U.S. residents. Such people, as opposed to children brought illegally by their parents, can hardly argue they didn’t know they were breaking a law.

While current DHS deportation policies focus more on illegal immigrants who committed crimes and shy away from splitting families, the next administration may have a different idea.