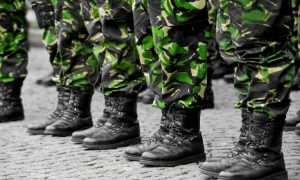 Two weeks ago, on Monday, July 6, President Obama made a rare visit to the Pentagon to meet with his military advisers and discuss the strategy (or lack thereof) for defeating ISIS. In a news conference afterward, he revealed nothing new about the fight against ISIS. He did, however, offer a brief peek at the impending fight over the defense budget.

That battle, between congressional Republicans and the White House, will come to the fore as Oct. 1—the start of the new fiscal year—draws closer. The president has proposed breaking federal spending caps on both defense and non-defense programs. Republicans in Congress responded by proposing increases for defense alone.

The administration then threatened a veto of any bill that increases defense spending without corresponding increases in non-defense spending. Even Secretary of Defense Ashton Carter has publicly and repeatedly supported the president’s veto strategy, which would deny funding for his own department.

Which brings us to the press conference two weeks ago. Although the president planned to give a prepared statement without taking any questions, a reporter asked if he would veto the defense bills. Obama’s response was telling:

Our men and women are going to get paid. And if you’ll note that I’ve now been president for six and a half years, and we’ve had some wrangling with Congress in the past. Our service members haven’t missed a paycheck.

The president went on to give an artful non-answer about the importance of the long-term and investing in things like education and research. And while the president’s commitment to the troops is good and right, a veto of either the defense authorization bill or the defense appropriations bill could affect the troops quite negatively.

The National Defense Authorization Act (NDAA) will likely reach the president’s desk in a month or so. This is a policy and budget bill that addresses a wide variety of defense issues, including pay and benefits for service members. The NDAA could provide up to a 2.3 percent pay raise for the troops as well as a variety of bonuses and retention sweeteners for certain military specialties. This bill will also include hundreds of other provisions addressing everything from military retirement to health care to acquisition reform.

If the president does veto the NDAA, it could forestall the pay raise that troops receive as well as curtail numerous other important programs and benefits for the men and women in uniform.

The president has also vowed to veto the defense appropriations bill—currently placed on hold by Senate Democrats. The appropriations bill is what actually provides the money to execute the policies established in the NDAA. And this is where President Obama’s promise that service members will get their paychecks becomes shaky.

The bottom line? A veto of either defense bill would put the paychecks of service members at risk. If the president wants to ensure that our men and women in uniform can pay their bills on time, he should not threaten to veto bills that ensure they get paid on time. The defense budget should not be used as political leverage to increase non-defense spending.

Justin T. Johnson specializes in defense budgets and policies for The Heritage Foundation’s Allison Center for National Security and Foreign Policy. Copyright The Daily Signal. This article was previously published in InsideSources.