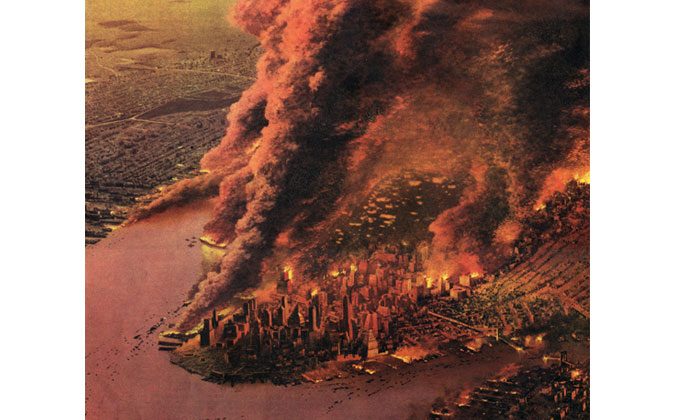 Illustration of a nuclear attack on New York, Colliers, 1950.
Crisis in Ukraine

If New York City Is the Victim of a Nuclear Attack, It Won’t Be by Nuclear Terrorists

At a news conference at the end of Nuclear Security Summit at The Hague on March 25, President Obama sought to put in perspective any threat to U.S. national security that Russia’s annexation of Crimea might pose.

“I continue to be much more concerned when it comes to our security with the prospect of a nuclear weapon going off in Manhattan.”

In a new book titled Overcoming Pakistan’s Nuclear Dangers (IISS Adelphi), Mark Fitzpatrick of the International Institute for Strategic Studies in London maintains that, as reported by Agence France-Press, that “the risk of a much-discussed scenario in which Islamic extremists seize nuclear weapons was exaggerated, and that the larger danger was that Pakistan-linked militants would launch a new attack inside India and trigger a devastating nuclear war.”

Even if confined to South and Central Asia, a nuclear war would have devastating consequences to the world. But, when it comes to a nuclear attack on New York, the source is much less unlikely (or marginally more likely) to be Islamist extremists than Russia.

Thus when President Obama states that he’s more concerned with a nuclear strike on Manhattan, he’s actually speaking about a Russian attack without necessarily realizing it. In the same vein, if President Putin voiced similar concerns about Moscow, the source of a nuclear attack is much less likely to be Islamist extremists than the United States. In other words, nuclear war remains the domain of the superpowers.

Russ Wellen edits the Foreign Policy in Focus blog Focal Points for the Institute of Policy Studies. A student of the metaphysics of nuclear weapons, he has written about disarmament for a variety of publications such as AlterNet, Asia Times Online, Bulletin of the Atomic Scientists, the Journal of Psychohistory, and Truthout. Originally published in Foreign Policy in Focus under a Creative Commons Attribution 3.0 License.