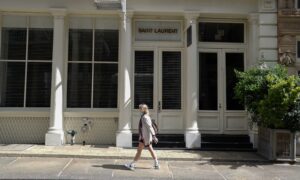 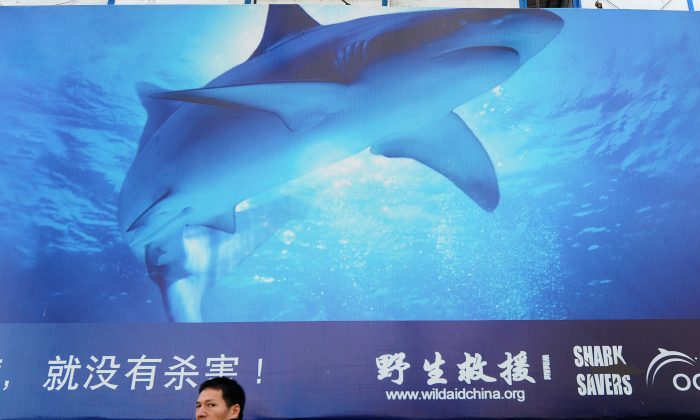 A pedestrian walking past a billboard in Shanghai, on November 15, 2010. (FREDERIC J. BROWN/AFP/Getty Images)
Business

China removes data about capital flows from report, and it's not the first time
By Valentin Schmid
biggersmaller
Print

By and large, the market is used to China fiddling with its economic numbers, or making them up completely, like GDP figures.

The market, however, mostly believed the figures on foreign exchange reserves as well as capital flows released by the People’s Bank of China (PBOC) and the State Administration of Foreign Exchange (SAFE). At least until now.

According to the South China Morning Post, the PBOC removed a key number about foreign exchange transactions in the banking system for January 2016. The report in question is titled “Sources and Uses of Credit Funds of Financial Institutions.”

This change in methodology comes at a crucial time for China, which is bleeding foreign exchange reserves, and foreigners as well as citizens are pulling out capital in record amounts.

Foreign exchange reserves at the central bank level decreased by $99 billion, and the Institute of International Finance (IIF) estimates as much as $113 billion in capital left the country in January.

We have this on our radar as a significant risk to watch for. We are not the only ones who are worried about this.
— Emre Tiftik, Institute of International Finance

Emre Tiftik, who tracks the data for the IIF, says he started to notice strange moves in the data regarding capital flows after the surprise devaluation of the renminbi last August.

“Starting from the third quarter, there are so many outliers in tiny places which created the impression officials are trying to reduce the outflows,” he said.

An example is the category of “other assets,” in the capital account that represents “other” inflows into China. According to Tiftik, it wasn’t much higher than $50 million per quarter and then suddenly increased to $100 billion in the third quarter, reducing the net number of outflows.

Outward direct investment, the money Chinese are investing abroad, also turned sharply negative, which means the Chinese are selling foreign assets and repatriating the money. Another reduction in the total outflow figure.

“They completely changed the outward direct investment figures; they were -$30 billion, now they are -$45 billion,” said Tiftik.

Robin Koepke, a senior economist at the IIF, notes another instance where China just stopped reporting inconvenient data in the middle of 2015: “We had the same issue when they started reporting more data on equity portfolio flows in early 2014 and then stopped in the summer of 2015, right when the markets became volatile,” he said. The last number of June 2015 shows an outflow of $11 billion.

Without adjusting for all these erratic moves, the IIF estimates $637 billion left China in 2015.

But the people at the IIF and the South China Morning Post aren’t the only ones missing data on China’s foreign exchange holdings or transactions.

China is becoming the capital provider to the rest of the world.
— Emre Tiftik, Institute of International Finance

“They always reported ‘Rest of the World,’ and then within ‘Rest of the World’ they segregated ‘Official Institutions’ from ‘Non-Official.’ In the last couple of reports, they stopped separating into ‘official’ and ‘non-official.’ ‘Official’ were foreign central banks. Within foreign central banks, China was in a league of its own. I don’t know really what prompted that change,” she said.

When officials stop releasing certain data, it usually doesn’t bode well for the future. In 2006, the Federal Reserve stopped releasing data on M3, a measure of the money supply, which included so-called repurchase agreements or repos.

In 2008, Lehman Brothers went bankrupt after financial markets found out it funded itself almost exclusively with short-term repos, had borrowed too much to begin with, and most likely wasn’t able to repay its lenders.

Market Forces Could Push China to the Brink

As for China, Tiftik thinks Chinese people are going to move money out of the country wholesale, and foreigners won’t move a lot of money in.

This is only possible, however, if China sticks to its agenda to liberalize the current account and does not impose more capital controls because of outflows.

With a closed capital account and stable exchange rate, “the Chinese [regime] invested foreign exchange on behalf of private parties. They collected reserves and invested them in Treasurys. Now the residents and the corporates are starting to provide capital to the rest of the world with the capital account liberalization,” said Tiftik.

Will this move lead to a rapid devaluation of the yuan versus the U.S. dollar?

“We have this on our radar as a significant risk to watch for. We are not the only ones who are worried about this.”