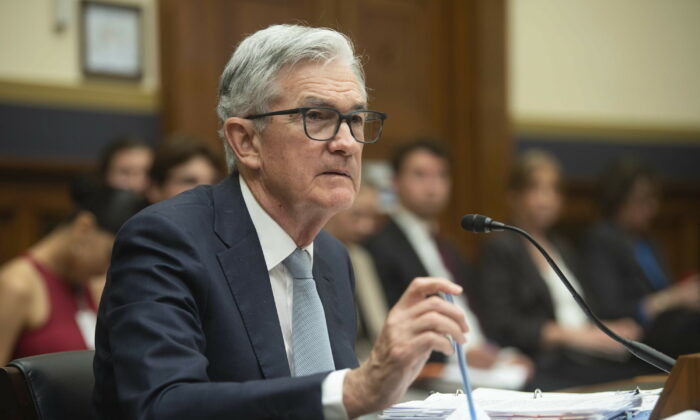 If the Federal Reserve shies away from its current policy of raising rates and tightening the money supply, it wouldn’t alleviate pressures in the market, at least not for long, according to investment analyst Michael Lebowitz. Instead, it may crush the economy.

The Fed started to tighten the credit spigots earlier this year in order to curb demand and slow down price inflation, which rose to 9.1 percent in June—a four-decade high. The tightening needs to continue until inflation drops enough to instill confidence in the bond market, Lebowitz suggested in a recent Wealthion interview.

As the logic goes, if bondholders are confident enough that inflation will go down to the Fed’s target of 2 percent per year, they’ll be willing to hold bonds with relatively low yields. If the Fed returns to a loose monetary policy before such confidence settles in, bondholders will demand higher yields to offset the losses from inflation that they would expect to continue.

“The bond market’s going to throw up,” Lebowitz said. “Yields are going to go much higher and that has a circular effect on everything.”

If bond yields go up, so would the interest on mortgages and corporate loans, he noted, which in turn signals more corporate defaults and layoffs—in short, a recession.

“All that economic pressure that people may have thought was being alleviated because of the Fed’s pivoting—it’s actually the opposite,” Lebowitz said.

“It’s going to squash the economy.”

His argument goes against the basic idea behind the Fed’s policy of quantitative easing and tightening. If the Fed tightens, it means that it’s unloading some of the Treasurys it holds and tapering its purchases. Since this leaves more Treasurys on the market, the increased supply should prompt buyers to ask for higher yields.

Yet in Lebowitz’s observation, the logic reverses if viewed from the perspective of inflation expectations. When the Fed is buying a lot of Treasurys, the market sees it as inflationary, and it pushes bond yields up. When the Fed starts to taper, as it has over the past month and a half, bond yields go down, because it boosts confidence in the bond market, which sees it as the Fed “doing all the right things … to fight inflation.”

It seems to have worked, in his view.

“So far, they’ve been able to slowly let the air out of the bubble,” Lebowitz said, explaining that higher interest rates and a little bit of tapering have so far shaved 20 percent off the stock market, but in an “orderly” fashion, prompting some loan failures, but nothing “extreme.”

“Will they be able to keep doing it?”

Gradually declining stock prices can easily turn into a freefall, he noted. Also, rising interest rates mean that the government needs to pay more and more to service its debt. Some analysts have argued that U.S. government debt is now so high (more than $30 trillion) that the prospect of a fiscal crisis will force the Fed to reverse course in a matter of months.

Lebowitz expects that the Fed will stop its tightening too soon.

“I don’t trust the Federal Reserve. I think they have, in the past, been so quick to save the financial community, so quick to save banks, to save hedge funds, to make sure we never have a recession,” he said.

Lebowitz acknowledged that the Fed has recently been hawkish, but questioned whether the central bank has really changed.

If the Fed even just softens its rhetoric, it “may help financial markets in the very short run,” Lebowitz said, but he warned that it would be “a very deadly gamble.”

Correction: A previous version of the article incorrectly described how the Federal Reserve has been reducing its Treasury holdings. The Fed has reduced its purchases of Treasurys. The Epoch Times regrets the error.