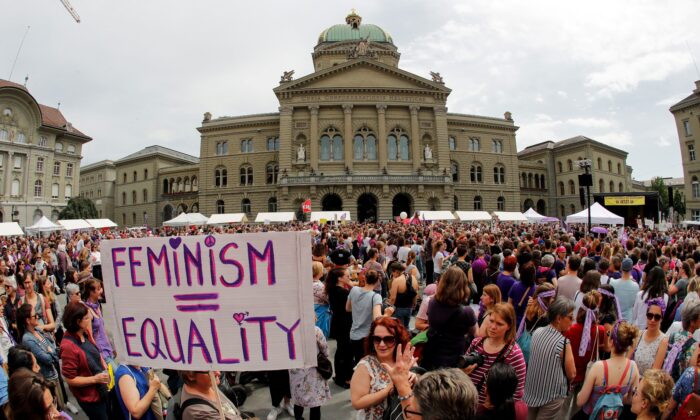 A woman holds a sign reading "Feminism = Equality" as she takes part in a nation-wide women's strike for wage parity outside the federal palace, on June 14, 2019 in the Swiss capital Bern. (Stefan Wermuth/AFP/Getty Images)
Viewpoints

If Equality Is Important, Why Aren’t Feminists Pushing for It in Every Field, Not Just STEM?

Feminists are often pushing for equality in the workplace, specifically in STEM-related fields. But if equality is so important, why aren’t they advocating for it in every field?

A recent study published in the Journal of Experimental Social Psychology titled, “Do people care if men don’t care about caring? The asymmetry in support for changing gender roles,” examined this very question.

A portion of the study’s abstract reads:

“Not all instances of gender inequality are equally concerning. An emphasis on women’s underrepresentation in Science, Technology, Engineering, and Math roles (STEM) has not been matched by a similar concern about men’s underrepresentation in Healthcare, Early Education, and Domestic roles (HEED). The current research investigates whether and why people perceive gender imbalances in male-dominated careers (STEM and leadership) as more problematic than gender imbalances in female-dominated, caregiving careers (HEED). Results from four studies (total N = 754) document a tendency to more strongly support the inclusion of women in male-dominated careers, compared to the inclusion of men in female-dominated careers.”

The results of the study were unique and fascinating. Here are a few of the key takeaways:

In sum, if women are underrepresented in a higher-paying field like STEM, it must be someone’s fault, so people are really passionate about changing this. Conversely, even though there are fewer men in non-STEM fields (such as education and health care), that kind of gender inequality is of no concern to society.

Part of this debate stems from the underlying belief that men make better career choices than women. This is the fundamental idea behind the “women in STEM” push. Few people admit this, but the idea that we need to convince girls or women to go into STEM and be equally represented is based on the idea that, if given the choice without a nudge, women would make the “wrong” choice and not go into STEM.

Now, the counter-argument will be “women don’t go into STEM because it’s male-dominated,” which I will concede has some truth to it. It’s much harder to go into a workplace where upwards of 90 percent of colleagues are the opposite gender. But there’s still the fundamental underlying belief that STEM fields are better than non-STEM fields. This study seems to shows that this belief is prevalent.

In fact, the study concludes, “This asymmetry in support for social action towards change is predicted by beliefs about what the ideal gender representation should be and the perceived causes of gender imbalances in each career type.”

The results raise a question: Why aren’t we worried about men’s underperformance in school relative to women? They do significantly poorer in language fields, graduate at lower rates than women, and attend both undergraduate and graduate programs less often than women. They also shy away from early education, health care, and domestic careers like nannying. Where’s the outcry?

In the beginning, there was a disparity in gender parity almost exclusively and obviously affecting women. Women’s education was being neglected in favor of men’s because women didn’t need a great job—they would be homemakers and their husbands would provide. Slowly gender parity for women in the workplace began to change.

However, as this happened, the goalposts kept moving: It was not enough that girls started getting better grades and graduating at higher rates; their jobs weren’t high-profile enough or their salaries didn’t match. Feminists concluded they had more work to do, and they weren’t entirely off-base.

All this was occurring against the unconscious idea that women make sub-optimal choices when they leave work to raise children or decide to do caregiver jobs they find fulfilling instead of taking over the boardroom. Society, particularly feminists, deemed that more, earlier intervention was needed to change women’s ideas of what they want. However, the issue has now jumped the shark, as the saying goes.

This study seems to suggest that the way society views this zero-sum game is that as long as any imbalance exists between men and women in “optimal” outcomes, then we don’t even need to look at where men are when it comes to certain fields or salaries because of the prevailing belief they occupy the high ground. This does both men and women a disservice. Equality for equity’s sake is a kind of faux equity sure to backfire.

Instead, the real goal is to quash some women’s natural desires to remain in fields they are drawn to, or even to remain focused on child-rearing, in the hopes she will eventually choose a “better” field and thus balance out the inequality. This is happening to the detriment of women and men—and it needs to stop.