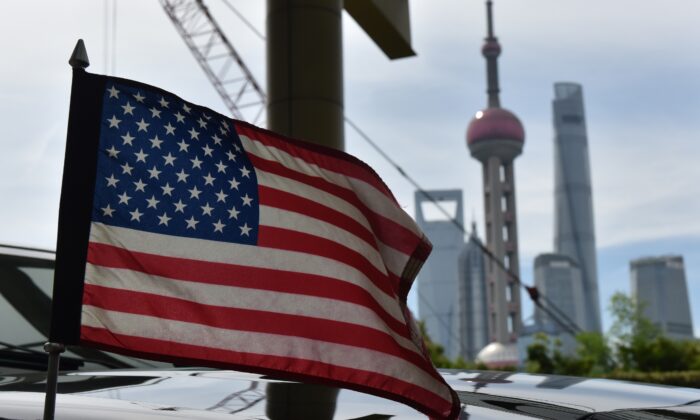 A U.S. flag flies on a U.S. consulate car with the backdrop of buildings in the Lujiazui financial district, outside a hotel where U.S. trade negotiators are staying in Shanghai, China on July 31, 2019. (Greg Baker/AFP/Getty Images)
Thinking About China

If China’s Economy Collapses, the US Will Suffer Immensely

How worried should we be about China’s economy? According to China expert Daniel H. Rosen, the answer is very.

Rosen, an author and academic, warns readers that the end times for the world’s second-largest economy are fast approaching. Is Rosen right? And if so, what would a collapsing China mean for the rest of the world, especially the United States?

When it comes to discussing China, there appears to be two schools of thought. Let’s call them System 1 and System 2.

Disciples of System 1 view China as an unstoppable juggernaut, a geopolitical great white shark that will eventually devour everything in its path. With Xi Jinping at the helm, they argue, this rising superpower will continue to exercise unprecedented levels of influence across the world, from North America to North Africa.

System 2 thinkers, on the other hand, view China in a very different light. With a rapidly aging population, high levels of unemployment, and 600 million people living in poverty, the country looks to be in a state of decline.

So, what are we to think? Which China is the real China? Are we witnessing an unstoppable force, or are we in fact witnessing the equivalent of the Titanic sinking, albeit in super-slow motion?

In August, I wrote a piece asking if we were witnessing the “Great Fall of Beijing.” The answer appeared—and still appears—to be yes. Although the potential demise of a tyrannical regime should be celebrated, such a demise would send ripple-effects across the world, shaking the United States to its core.

As the Chinese Communist Party (CCP) promotes the idea of “common prosperity,” cracking down on everything from tech companies to education, American businesses operating in China are fearful of their existence.

With China and the United States now engaged in a new cold war, their fears are very much warranted. Hundreds of American companies rely on China for business. Last year, McDonald’s announced plans to invest a further 2.5 billion yuan (US$381 million) into the Chinese market. Over the next couple of years, the “McCafé concept” is set to be introduced “across more than 4,000 locations” throughout the country, according to World Coffee Portal. Starbucks, inarguably the biggest name in coffee, has 5,100 stores in 200 cities throughout China.

The likes of the NBA and NFL also rely heavily on the Chinese market. Each year, the former rakes in close to $500 million in revenue. The NFL, meanwhile, considers China to be a “priority market.” In reality, the NFL speaks for so many American businesses, all of whom have made China a “priority market.”

If China fails, the United States will most certainly suffer. As the economist John Tamny has noted, if China was to regress, plenty of Americans would surely cheer. After all, “a rising, economically prosperous China represents a major military threat, and by extension a threat to global American hegemony.” However, Tamny warned that an economic retreat would result in “major economic discomfort in the U.S.”

American businesses “of all sizes” would find themselves left with little option but to “shed workers to reflect the loss of a huge market,” according to Tamny. Furthermore, with “the loss of the biggest non-U.S. market for American companies,” panic would ensue. “U.S. equity indices,” according to Tamny, would simply tank. If China does retreat, we must prepare ourselves “for the mother of all market corrections.” Tamny, a man very much with his finger on the global economy’s pulse, knows what he is talking about, and his words should be heeded.

Of course, China could weather the current economic storm; it could go on to become the most powerful country in the world. If this does occur, then the United States will find itself dethroned.

A nation known for genocide and organ harvesting will find itself the commanding-country-in-chief. For all its technological prowess, it’s important to remember that modern day China still operates on communist software. The hardware—skyscrapers, tech hubs, luxury condos, etc.—is just an aesthetic feature. The software, very much Mao-influenced, is still the same as it was decades ago.

To counter the Chinese regime, President Joe Biden has promised to engage in “relentless diplomacy.” Will this actually work? Hardly. This is China we are dealing with, not Canada. The only type of diplomacy CCP leader Xi Jinping is familiar with is the “wolf warrior” type. As the Financial Times recently noted, the U.S. president “has yet to secure a meaningful dialogue with an increasingly paranoid Beijing.”

What we face here is a catch-22 situation of epic proportions. A China that becomes more powerful does so at the expense of the United States. In this geopolitical race for superpower supremacy, if China wins, the United States loses. On the other hand, if China loses, tens of thousands of U.S. businesses also lose—their losses will likely cripple the American economy.

For China to actually suffer an irreversible demise, we must be willing to accept the bruises that will inevitably follow.

According to a recent Asia Times report, at a “seasonally adjusted annual rate, the United States is buying $635 billion of Chinese goods, equal to a staggering 27% of US manufacturing Gross Domestic Product.” More worryingly, as the author noted, this sort of “import dependency” is more commonly associated with “Third World countries dependent on former colonial powers.” The previous sentence should fill every American with a sense of dread.

By selling out to China, the United States has put all its eggs in the Beijing basket. A thoroughly unwise, largely unforgivable decision. If one sell’s their soul to the devil, then one must be prepared to spend some time in Hell.