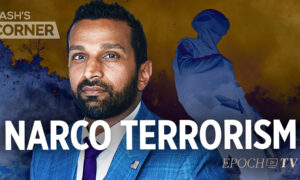 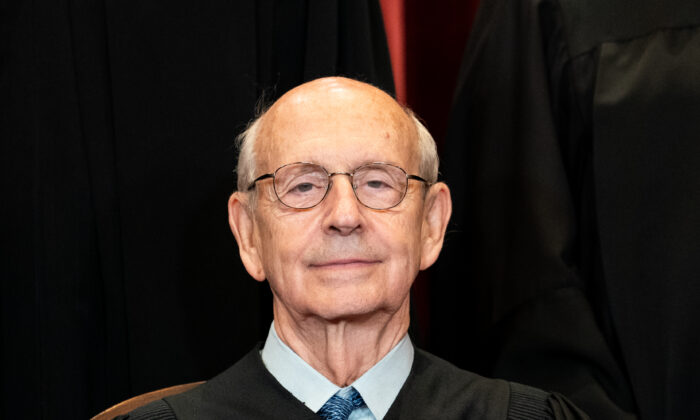 Associate Justice Stephen Breyer during a group photo of the justices at the Supreme Court in Washington on April 23, 2021. (Erin Schaff-Pool/Getty Images)
Judiciary

If Breyer Retires, Look for Adherent of Living Constitution to Take His Place

Supreme Court Justice Stephen Breyer has recently been urged by progressives to retire early from the bench, preferably sooner rather than later, to get another adherent of the living constitution theory onto the bench.

While the Supreme Court is often described as split between liberals and conservatives, perhaps a more accurate description would categorize justices as living constitutionalists or originalists, with Breyer in the living constitution camp.

In 2024, Breyer will be 86 years old. His death during a potential Republican White House could add another constitutional originalist to the bench, making the constitutional interpretive split 7–2.

Progressives are urging Breyer’s retirement to avoid what happened last fall when Justice Ruth Bader Ginsburg died prior to the 2020 presidential election, and Justice Amy Coney Barrett quickly replaced her on the bench. President Obama appointed the last two progressive justices in 2009 and 2010 when then-Justices David Souter and John Paul Stevens, respectively, retired and were replaced by Elena Kagan and Sonia Sotomayor.

The Biden administration has already begun making nominations to fill vacancies throughout the U.S. Court of Appeals such as the 2nd Circuit and the coveted D.C. Circuit, from which a Supreme Court nominee might be drawn. Judge Ketanji Brown Jackson is a nominee who will likely become the next judge for the U.S. Court of Appeals for the District of Columbia Circuit, and she was also a law clerk to Justice Breyer.

Breyer has served as an advocate for the theory of the living constitution. He was the only justice on the Court to openly debate the late Justice Antonin Scalia on the theories of constitutional interpretation, with Scalia, of course, taking the originalist position. The Biden administration is highly likely to nominate a judge who fits the Breyer mold, a staunch adherent to the living constitution.

Professor Erwin Chemerinsky, dean of the University of California–Berkeley School of Law, defined living constitution for The Epoch Times as, “the words of the Constitution get their meaning over time, and it rejects the idea that the meaning of a constitutional provision is fixed when it is adopted and can be changed only by an amendment.”

The theory’s proponents also believe that “the meaning of a constitutional provision can change by an interpretation.”

Chemerinsky elaborated on how proponents of the living constitution look to materials for applying the constitutional theory, and he said that both liberal and conservative justices adhere to the concept.

“The idea of a living constitution is that it looks at a variety of different sources. It should start with the text and stay true to the text; it should consider the original meaning, precedence, and tradition, but it ultimately rests with the idea that judges should determine the sole meaning of a constitutional provision. I believe that all justices, liberal or conservative, follow a living constitution.

Charles Kesler, professor of government at Claremont McKenna College and editor of the Claremont Review of Books, is the author of “Crisis of the Two Constitutions: The Rise, Decline, and Recovery of American Greatness.” In his book, Kesler speaks directly on the controversy over the interpretative theories of original intent versus the living constitution.

“The term itself is misleading because it suggests it’s an environmental thing, but it’s not about natural selection in a Darwinian sense. It’s an artificial selection,” Kesler told The Epoch Times. “It’s a science varying the conditions that looks to see if it can cure the social problems of the 20th- and 21st-century that life can throw up at the Court.”

When looking at the modern notion of the living constitution, Kesler believes it has undergone two crucial changes.

“First, it is in pure theory an ongoing process with no institutions meant to be permanent that come out of it. That idea was altered in the 1930s when the welfare state was invented, because now you have these new kinds of ‘rights’ to education, health care, work, and the like that are meant to be somewhat permanent. Instead of history being an unending flux, there are new institutions that are meant to last.

“The second change is that the appeal of science begins to fade as a culture of liberalism is driven by will and preference—the Nietzschean will to power—to satisfy you, the authentic you. The living constitution then becomes something not measured by science as it does by being measured by a Nietzschean will to power and assertiveness, and that is where liberalism itself is trending.

“It becomes whatever scheme of power distribution and creation that can prevail, and it is no longer measured by history or science but by nothingness.”