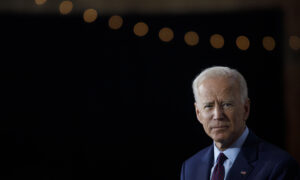 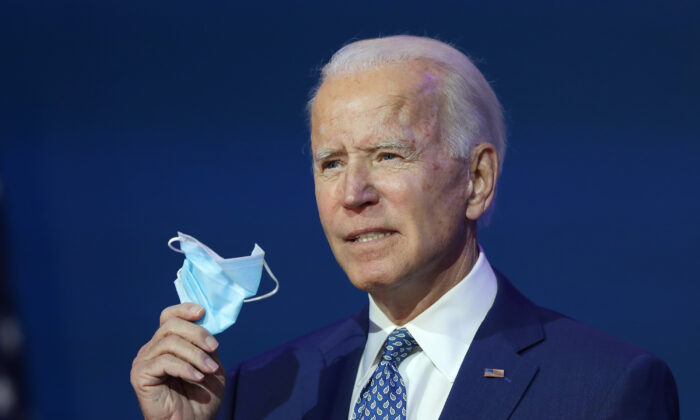 Former vice-president Joe Biden speaks about how, should he be elected president, his administration would respond to COVID-19 at The Queen Theatre in Wilmington, Del., on Nov. 9, 2020. (Joe Raedle/Getty Images)
Viewpoints

If Biden Is Elected, Then Expect ‘Obey Authority’ COVID Collectivism

When I was young, the watchword of the left was “question authority.” Today, it is “obey authority”—assuming, of course, the left is making the rules.

Should Joe Biden become president, the left will be in charge. Big time. And that means we’re likely to see a series of centralized COVID-19 policies imposed by the federal government and enforced through a combination of law, media propagandizing, peer pressure, and private sector activism.

Former Vice President Biden—he’s not yet officially president-elect—has repeatedly supported a national mask mandate, vacillating between forcing us all to mask up via executive fiat—which would be of dubious constitutionality—or jawboning governors and local officials to issue such orders.

As a famous personage once put it, “At this point, what difference does it make?”

I don’t see resisting masks as a hill to die on since the intrusion into personal liberty is relatively minimal. But surely any universal mandate should be amply justified by scientific certainty. And it turns out that the efficacy of masks in preventing the spread of COVID has not been proven scientifically, despite what you might have heard on CNN. Yes, public health orthodoxy and some studies claim that masks reduce transmission.

But it’s far from a sure thing. For example, a meta-analysis of studies on masking and social distancing published in The Lancet in June found that there was a “low certainty” that cloth and surgical masks “might result in a large reduction in virus infection.”

“Might result?” Such hedged language hardly constitutes a commandment from Mount Zion sufficient to bind us all under a mandatory masking policy.

Never mind. Resistance is futile. Regardless of their actual preventative benefit, masks have become potent icons of the community’s quest for safety, a visible expression of social cohesiveness. Think of it as the new emperor worship that, like the pinch of incense thrown into the fire of old, we participate in to demonstrate our membership in civil society. If you doubt that, try entering a grocery store without one.

Early in the pandemic, President Donald Trump supported a 6-week lockdown to “flatten the curve” of infections and thereby prevent hospitals from being overwhelmed with critical COVID-19 cases. The tactic worked, but the economy imploded.

The president upset the public health establishment and the media by shifting the administration’s focus to opening the economy, calling the lockdown “cure”—which increased suicides, social isolation, opioid addictions, family abuse, etc.—“worse than the disease.”

Biden has taken the opposite tack, vowing to institute another lockdown if so advised by “the scientists.” There is little doubt that they will. Indeed, bioethicist Ezekiel Emanuel—who has been advising Biden during the campaign and was just named to his new COVID advisory task force—called for an 18-month shutdown when the disease first emerged.

More recently, he was the lead author of an open letter urging the imposition of a second and even more draconian shutdown, writing: “Non-essential businesses should be closed. Restaurant service should be limited to take-out. People should stay home, going out only to get food and medicine or to exercise and get fresh air.”

With Biden and Democrats vowing to be the anti-Trump on COVID policy, expect a renewed national lockdown to be imposed early next year, if Biden wins.

Pfizer just announced the successful development of a COVID vaccine. That’s great news, but it could portend a bitter national controversy over whether receiving the vaccine should be made mandatory.

Those with Biden’s ear are likely to so recommend. Emanuel once urged that every child in the country be required by law to receive an annual flu vaccine, so we know where he will probably stand. The New York Bar Association has also called for vaccines to be made mandatory. So have noted liberal bioethicists—the very kind of advocates likely to have ready ingress into the inner deliberations of a Biden administration—who already advocated the development of a federal immunization registry.

There has also been widespread establishment support for requiring essential workers to be vaccinated as a condition of employment, a category that would include workers at grocery stores, hotels, and restaurants.

An all-encompassing federal mandate would be unprecedented. But some believe it would be legal. Harvard law professor Alan Dershowitz, for one, claims that a 1905 Supreme Court case has already constitutionally validated a nationwide vaccine mandate. But that case found that the federal constitution doesn’t prevent localities from taking such necessary public health measures when circumstances warrant—not that the federal government could impose such a vaccine mandate nationally regardless of localized circumstances.

A lot may depend on the number of people who would be inoculated willingly. If, say, 80 percent would take the jab, the powers that be may conclude that coercion is unnecessary. But if there is any significant resistance, expect an unholy alliance between the public and private sectors to force us into line.

This much is certain. When Biden decides on a COVID policy, the entire media establishment will mobilize to suppress dissenting views, for example, by castigating skeptics of reigning orthodoxies as “anti-science” or conspiracy theorists.

We can also expect social media to suppress heterodox views about masks, vaccines, and other COVID policies. How do I know? Because they already do.

Science journals, which have become highly ideologized, can also be expected to push the party line—both by what they publish and by rejecting studies or opinion pieces that refute establishment canon—making it seem as if all “experts” agree on officially approved policy. Indeed, that suppression may already be happening with a controversial large Danish mask study currently unable to find a journal that will publish the findings.

The coming COVID collectivism will not just fight disease. It will also accrue increased power to the government and its private-sector allies. The great unknown is whether Americans will question such inflating institutional authority in a time of pandemic, or meekly obey it.