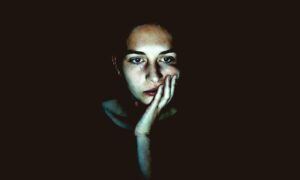 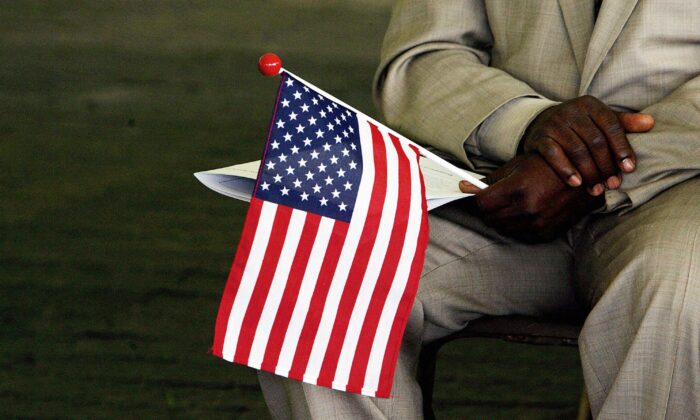 Jeneba Kanu, originally from Sierra Leone, holds a U.S. flag while waiting to become an American citizen, during a naturalization ceremony at George Washington's Mount Vernon in Alexandria, Va., on May 22, 2006. (Jim Watson/AFP via Getty Images)
Viewpoints

If America Is Racist, Why Have Millions of Blacks Immigrated Here? Did Jews Immigrate to Germany in the 1930s?

If America is systemically racist, why have millions of blacks from Africa and the Caribbean come to this country over the past 50 years? Why would they and many millions more want to move from all-black societies to a white-dominated, racist one?

This is a question every black and white leftist should be asked. After all, no Jews moved to Germany in the 1930s. And why didn’t any? After all, many Jews were suffering terrible persecution and poverty in Russia and in Eastern Europe. Why didn’t any of them move to Germany after 1933?

We all know the answer: Because Germany was systemically anti-Semitic.

Even leftists know that answer.

How else could leftists regard blacks who willingly move to America? Any black person who decides to leave a black country for America—a place the left claims was founded by racists to perpetuate racism, built and sustained by racism, to this day composed largely of whites, every one of whom is racist and many of whom are white supremacists, and therefore remains systemically racist—must be either be a fool, an ignoramus, or both.

If so-called black “leaders” and other blacks on the left and white progressives believe what they say about America, why aren’t they doing everything they can to dissuade blacks in Africa and the Caribbean from coming to America? Why aren’t they regularly visiting African and Caribbean countries to warn Africans away from the black-hating country they are thinking of immigrating to?

To this question there is only one possible answer: They don’t believe what they say about America.

Whether leftists believe their lies is a question I have pondered for years. And I have concluded that in general, they do. Most leftists believe that Russia colluded with the Trump campaign; that men menstruate and give birth; that Shakespeare and Beethoven are revered not because they are great but because they are white; that global warming is an “existential” threat; that the events of Jan. 6 were an “insurrection”; that voter IDs are a form of voter suppression; and that people who had COVID-19 need to be vaccinated.

But with regard to their believing America is systemically racist and so persecutes blacks—LeBron James tweets that, like all blacks, “We’re literally hunted EVERYDAY/EVERYTIME we step foot outside the comfort of our homes!” and Oprah Winfrey likens present-day America to “the days of Jim Crow when black men would be lynched and dragged through the town as an example for other people to see”—their not making any attempt to dissuade blacks from coming to America makes no sense. It only makes sense if they don’t believe what they say about America.

Truth has never been a left-wing value. Truth is a liberal value and it’s a conservative value. But it has never been a left-wing value. Truth is nothing more than whatever the left says it is at any given moment. That is why Lenin, the father of modern leftism, named the Soviet Communist Party newspaper “Pravda,” the Russian word for “truth”—truth was what the Soviet Communist Party said it was. For Lenin, then, as for Rep. Adam Schiff, The New York Times, Yale University, and CNN today, truth is what they say it is.

Yet, there is a reality that Schiff and these others can’t deny: Vast numbers of blacks yearn to come to America. They do so because they haven’t been influenced by the pravda of Schiff and his fellow Democrats, The New York Times, and the rest of the left-wing media, or by Yale and the rest of America’s left-wing universities. They do so because they have been influenced not by pravda, but by actual truth: America is the least racist multi-ethnic, multi-racial country in world history, and any black who seeks to improve his life and that of his family has a better chance of doing so in America than anywhere else.

In fact, within one generation of immigrating to America, Africans from sub-Saharan African countries attain higher levels of educational attainment than the U.S. population as a whole and are more likely to have earned a degree in science, technology, engineering, and math (Pew Research).

That’s why it isn’t Africans who are foolish for wanting to come to America; it is America’s left for thinking they are fools.