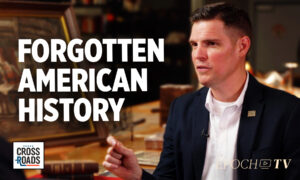 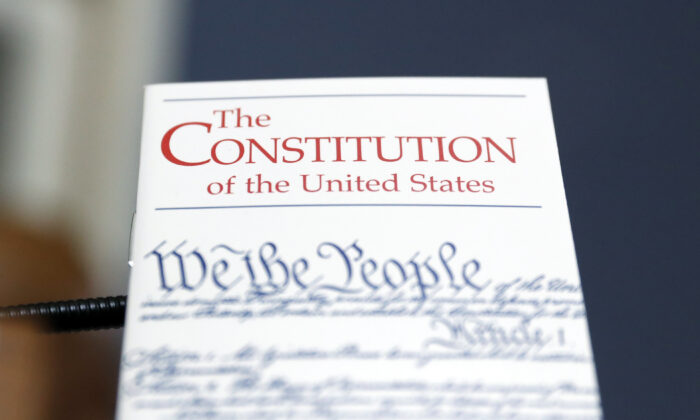 A copy of the U.S. Constitution during a House hearing on Dec. 17, 2019. (Andrew Harnik/Pool/Getty Images)
Defending America

If America Falls Into Socialism It ‘Might Not Ever Recover:’ President of Historical Society

Americans today believe that they can embrace socialist, Marxist, or communist ideas and still have the stability, freedom, and prosperity that the country has enjoyed for more than two centuries, and maybe make it even better, said Tim Barton, president of WallBuilders organization. WallBuilders is an organization dedicated to presenting America’s forgotten history and heroes with a specific emphasis on “the moral, religious, and constitutional foundation on which America was built,” its website states.

In an interview with The Epoch Times, Barton said people have taken for granted the fact that the Constitution is more than 230 years old. They don’t recognize that the stability they have been able to live with for all those years owes to the constitutional foundation on which America was built.

Now America is in a dangerous situation that we might not ever recover from if the majority of Americans decide to follow socialism. Americans have forgotten the history of communism and do not realize the dangers of it.

“Nobody really in the rest of the world for the last several hundred years has enjoyed any of the blessings and levels of prosperity and freedom that we’ve enjoyed in America.”

There has never been a time in America where more people have openly and proudly embraced Marxist ideology, Barton said. Americans used to remember what happened in the 20th century under Marxism and communism, where communist regimes were responsible for more than 100 million deaths in the 20th century alone.

Today, the majority of college students see capitalism and the free market as bad or evil and perceive socialism as a good thing. “They embrace it because they don’t recognize, we’ve done such a poor job teaching history in America,” Barton explained.

“We have had such a bad education system in America, that has encouraged such bad philosophy, political philosophy and economic philosophy” that most Americans don’t recognize the danger of the ideology and its propaganda that are being imparted to them.

He believes that because people do not know the history, they “see the Constitution as a document instead of recognizing that this is the document that has helped us be the most free, the most stable nation in the history of the world.”

Historical figures, such as George Washington or Abraham Lincoln are oftentimes villainized today because people don’t know their stories. “Those men weren’t perfect [but they] were incredible leaders in their own time, helping move America forward, helping bring America stability, helping fight for equality.”

Right now in America, we live in a culture that now questions if truth even exists, and in the midst of it everything that has been a traditional value a conventional norm is being questioned, Barton said, therefore socialist, Marxist, or communist ideas made their way up in the society.

People perceive the Constitution as an obstacle that prevents and holds them back from being able to embrace the values or the ideology of socialism or Marxism or communism.

Defending the Constitution Matters Now More Than Ever

“The Constitution has never had greater attacks than we have seen in the last recent years,” Barton said adding, that there were people in the past who argued against the Constitution but it has never been the majority of Americans.

There has never been a time when the majority of the next generation—now, the majority of millennials—embraced the ideology of socialism, Marxism, and communism, Barton asserted, and those people will be America’s future leaders. The millennials constitute the largest voting bloc of any group of people in America.

“That’s why it’s a greater danger and threat today than it’s ever been. … And so that’s why it’s more significant now than ever [to defend the Constitution].”

WallBuilders possesses the largest private collection of original artifacts from the founding fathers’ era and uses it to educate Americans including college students and teachers in American history and the values of the Constitution because not much of it has been taught in schools, Barton said.

In its effort to defend the Constitution, WallBuilders works closely with federal and state-level legislators.

On the state level, WallBuilders helps equip state lawmakers with the knowledge needed to protect the Constitution and encourage them to do so. For example, the organization helps state legislators in their effort to exercise the powers reserved to the states under the 10th Amendment, such as recognizing states’ rights to help defend some other states, or helps them to ensure and promote the Bill of Rights, he added.

Barton will participate in The Epoch Times panel discussion “Defending the Constitution: Why It Matters Now More Than Ever,” which will be comprised of constitutional experts and rights defenders.

He will bring to the panel discussion several original documents from America’s founding fathers related to the Constitution to make the point that the principles enshrined in the Constitution are timeless and “those principles are some of the most incredible things that any government has ever done in the history of the world.”

The Constitution’s principles are basic, not detailed, and therefore they still apply similarly to the laws of gravity, Barton explained.

“I’m going to be articulating and presenting the argument that what the founding fathers did really was brilliant. And as Americans, we need to relearn the Constitution, and then we need to defend the principles of the Constitution.”