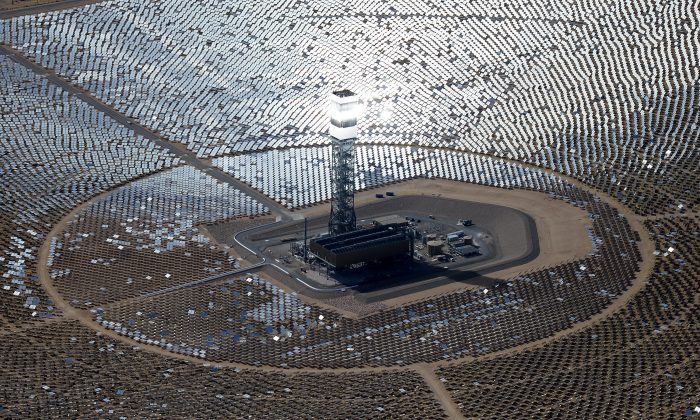 The Ivanpah Solar Electric Generating System in the Mojave Desert in California, near Primm, Nevada, on Feb. 20, 2014. The largest solar thermal power-tower system in the world, owned by NRG Energy, Google and BrightSource Energy, and formally opened in February 2014 in the Ivanpah Dry Lake, it uses 347,000 computer-controlled mirrors to focus sunlight onto boilers on top of three 459-foot towers, where water is heated to produce steam to power turbines providing power to more than 140,000 California homes. (Ethan Miller/Getty Images)
Environment

The giant Ivanpah solar power plant in the California Mojave Desert recently detailed how much natural gas it burned to generate power when the sun wasn’t sufficient—the equivalent to 46,000 tons of CO2 emissions in its first year, according to reports.

Along with its impacts on wildlife and its receipt of federal incentives, news of the CO2 emissions has renewed criticism of the 377-megawatt facility, which supplies 140,000 California homes during peak hours of the day.

Why is a solar power plant using natural gas, and does the associated CO2 disqualify it as “green”?

The use of natural gas to complement solar in fact highlights a trend toward what I call “speckled green” electricity generation—approaches that are not completely green, but in which natural gas enables more widespread, reliable, and affordable deployments of renewables.

Unlike the solar photovoltaic (PV) panels that are proliferating on rooftops such as my own, Ivanpah generates its power by angling mirrors to gather the intense sunlight of the Mojave Desert to produce heat. The mirrors reflect sunlight onto three power towers, where steam turns turbines to generate electricity.

This “concentrating” solar thermal approach is even more sensitive to clouds and particles than PV panels, since the mirrors can concentrate only the sunlight that arrives in a direct beam from the sun. Clouds and particulate matter scatter the light into directions that can still be utilized by photovoltaic panels but not the precisely angled mirrors.

Ivanpah, which is the largest solar concentrating plant in the world, began operation in early 2014, but unexpectedly cloudy conditions dampened electricity generation to below intended levels. Thus, soon after opening, Ivanpah petitioned the California Energy Commission to increase its use of natural gas. The commission’s staff analysis noted that the request would increase the plant’s carbon dioxide equivalent emissions limit from 62 pounds per megawatt hour (lb/MWh) to 75 lb/MWh. Of course, actual emissions are lower if sunnier conditions negate the need for extra natural gas use and increase solar output.

On a percentage basis, this looks like a big increase. But context is needed. U.S. power plants in 2012 emitted an average 1,137 lb/MWh of CO2—15 times Ivanpah’s “dirtier” new limit. In fact, this number understates the gap, since the Ivanpah limit includes associated maintenance vehicle emissions not counted in the national average.

Fox News and others have branded Ivanpah a “carbon polluter” by noting that its CO2 emissions top a federal threshold that requires reporting as a greenhouse gas emitting facility. Not mentioned is that Ivanpah’s emissions are just half the threshold of a “major stationary source,” denoting large facilities such as fossil fueled power plants or factories.

Critics rightly note that Ivanpah’s natural gas use and associated emissions are far higher than originally anticipated, with gas-fired auxiliary power now at times needed 4.5 hours per day rather than one as originally expected. Some critics specifically attack the use of natural gas with solar as “dirty power.”

Indeed, natural gas is a nonrenewable fossil fuel whose use causes CO2 and methane emissions. However, unless we expect to switch to completely renewable fuels overnight, which is unrealistic, fossil fuels will remain a major part of our energy mix in the decades ahead.

I believe using those fossil fuels synergistically with renewables offers great potential. The joint deployment of natural gas with solar thermal energy, sometimes referred to as a “hybrid solar” plant, is one such approach. At Ivanpah, natural gas provided less than 5 percent of the energy, yet may have substantially boosted solar power output by keeping the turbines online.

More broadly, the rapidly dispatchable—that is, able to generate power on demand—and adjustable nature of natural gas power generators enable greater penetration of variable wind and solar on the grid while maintaining reliability.

There are, however, other arguments that critics could lodge against Ivanpah.

Its electricity output underperformed expectations in its initial year, though output in 2015 has increased sharply. It’s likely that the added flexibility to use more natural gas, together with an extra year of experience, has contributed to the big boost in output.

As a cutting-edge energy project, Ivanpah received $1.6 billion in loan guarantees from the Department of Energy, plus a $660 million tax refund under the 30 percent Investment Tax Credit. Ivanpah also benefits from the tradable renewable energy credits it generates under California’s Renewable Portfolio Standard. Critics of government incentives for renewable energy may oppose the policies that enabled those incentives and credits. Also, as costs have fallen faster for utility scale solar photovoltaics than for solar thermal, Ivanpah is no longer seen as representing the most affordable possible future for solar.

In terms of environmental impacts beyond CO2, Ivanpah has been linked to 3,500 bird deaths. Environmentalists have also criticized Ivanpah for its proximity to some endangered species such as the desert tortoise.

Indeed, Ivanpah does not deserve to be considered the pure electric green energy source that we might seek in an ideal world. But all energy sources have environmental impacts, whether from emissions of combustion or obtaining the fuels or building the power plants and solar panels. The bird deaths from solar are tiny compared to those from fossil fuels.

At least from a climate perspective, I believe this particular case of “speckled green” energy is doing pretty well, reducing CO2 emissions per MWh by over 90 percent compared to our national average for electricity. For costs and more flexible siting, though, other approaches are likely to displace Ivanpah as exemplars of the path toward greener, more affordable electricity.

Daniel Cohan is an associate professor of environmental engineering and faculty scholar at Baker Institute for Public Policy, Rice University. This article was previously published on TheConversation.com