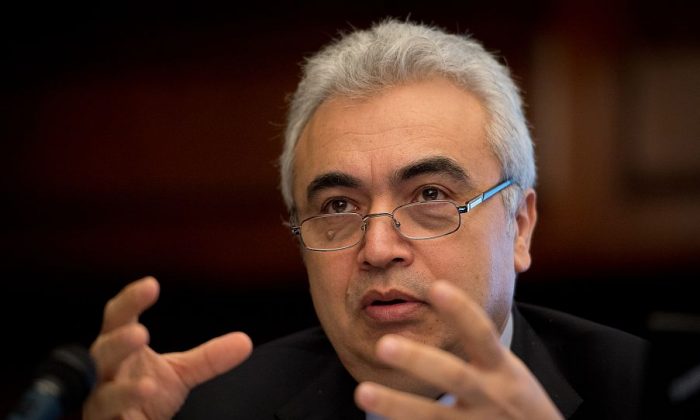 NEW YORK—Fatih Birol, chief economist of the International Energy Agency (IEA) reiterated his positive outlook on U.S. energy production in a speech at the Council on Foreign Relations in New York Wednesday.

“The United States will be the largest oil producer in the world in 2017, larger than Saudi Arabia,” said Birol. “This year’s findings confirm this trend; maybe even in 2015.” He added that most of the oil will be shale-based. Shale oil and gas can only be recovered by using advanced technology such as hydraulic fracturing, known as fracking.

It is part of a global theme in which countries that previously imported energy will become exporters.

“The job descriptions of these energy players are being redefined,” said Birol. “Some countries which have been energy importers are turning to be energy exporters, such as the U.S., in terms of natural gas.” He cited Brazil as another notable example.

“Almost all of this oil will be consumed in the United States. If we tell the Middle East producers we don’t need the growth of your oil fields, there might be no investment,” he said.

With countries shifting from importers to exporters, traditional energy trade routes will have to be redefined, according to Birol.

“It is very important for countries to read the game and position themselves … there are some major countries who were not able to understand what is going on and they lost a lot in terms of exports.”

Russia will also have to make changes.

“Russia will have to find a new exporter destination; it will be China, it will be Japan,” said Birol, adding that it’s due to the energy demand in Europe not growing very strongly and Russia currently exporting most of its energy to Europe.

Birol is also optimistic to manage and avoid the “legitimate” risks concerning fracking.

“We can minimize if not nullify these problems if the right policies are put into action,” he said.

Nonetheless, actually producing this gas and oil will not come cheaply, another reason why cheap Middle Eastern oil is still needed for the future.

“In order to produce [shale] oil, you need an oil price at $80,” said Birol. “In the Middle East, the cost of production is about 5 dollars.”