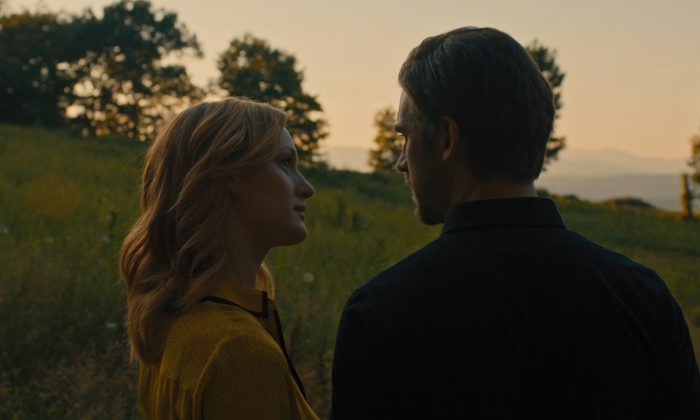 Ido Fluk’s ‘The Ticket’: A Man Juggles Faith and Desire in Effort to Retain His Sight

Filmmaker Ido Fluk is not religious, but he has long been fascinated with the idea of faith and observing how it coexists with the American dream.

In his first American film (his second feature, after his crowdfunded 2011 Israeli film, “Never Too Late”), Fluk tells the story of a blind man who has to come to terms with himself as he recovers his sight. “The Ticket” opens in theaters and on demand on April 7.

It is an intimately textured sensory experience that takes place in a small town where nobody is who they seem to be at first glance. There is nothing over the top about the film, despite the seemingly miraculous plot. It raises questions about human nature that have provoked discussion at early screenings, with viewers eager to share their perspectives on life.

James Harvey, played by Dan Stevens (who recently starred in the blockbuster “Beauty and the Beast”), is a devout man who lost his sight at a young age.

At the beginning of the film, we see the world through his eyes—unintelligible shapes and colors. He tells the story of a man who prayed to God every single day, praying to let him win the lottery. An angel asks God why he doesn’t let the man win, and God responds, “Well, I’d love to, but he’s never bought a ticket.”

It’s a story that Fluk has heard his dad tell countless times. “My dad has like 20 stock stories that he tells over and over again to everyone he meets, and ‘The Ticket’ is number 14, or something like that,” he said.

For a blind man to regain his sight—which is not unheard of but still very rare, as Fluk found in his research into the science of visual impairment—it’s a bit like winning the lottery, in that it is not necessarily as much of a windfall as one might expect. Fluk was accustomed to hearing stories of people who would win the lottery, then get divorced, buy a new apartment, and change their lives, only to go bankrupt six months later.

Soon after regaining his sight, James is reevaluating the relationships he built as a blind man, wondering if it would befit him more to trade up, as his friends and family ask whether he has become a different person and whether they all deserve this.

“I find it fascinating, this idea of working hard and attaining your goals in life. It can be misrepresented sometimes; you can work really hard in our world and not achieve anything, and you can also just win the lottery one day and get everything without having worked for it at all,” Fluk said.

These are ideas Fluk has long been interested in and read about, he says, citing a notable 19th-century lecture by scholar and preacher Russell Conwell called “Acres of Diamonds,” which was one of the most popular moral lectures of its time.

“The moral of this lecture was that all you had to do was be an honest man, work hard, be good with your community, and you’ll find acres of diamonds just planted beneath your feet,” Fluk said.

It’s a message that likely rang hollow for many people in the aftermath of the 2008 economic crash, when the actions of a few corrupt financial leaders led to disastrous results for many. Fluk and his co-writer, Sharon Mashihi, wrote the script at the height of the 2008 recession, and these themes bled into the film.

While writing “The Ticket,” he and Mashihi learned about debt management seminars held by churches that would “attract people who were heavily in debt, but also charge $60 per ticket.” He saw fliers advertising numbers to call for people to sell their houses, at a time of mass foreclosures. In the film, James, whose firm buys up homes like these, gets the idea to hold similar seminars at churches. The attendees are given a mixture of preaching and the low-hanging fruit of financial advice, like to pay off smaller debts first.

Fluk said witnessing these seminars was a little like stepping into an absurdist world.

“I’m really interested in the idea of faith, the place of faith within people’s lives, and within our politics or our money,” Fluk said. “I think whenever faith is included in those realms, which are earthly, something interesting happens, and it’s almost irrational, in a way.”

As James gets greedy, his proverbial winning ticket leads to his downfall. At one point, someone tells James no one is judging him. He replies, “Maybe God is.” The daily prayers near the beginning of his story become hysterical cries for help near the end.

A story of faith is just one way of reading it, Fluk added. In a way, he said, it is like the retelling of the biblical story of Job, where a prosperous man has all that is dear to him taken away, but his faith saves him. At the same time, it can be read as a completely secular story—the visual impairment is based in science, and the story is a very human one, the kind found in local papers all the time.

“It’s a movie about a man who believes in God but spends the entire movie expecting something, an answer. [He’s] screaming at the sky asking for forgiveness or help, or some kind of sign, and there’s never ever an answer,” Fluk said. “Some people discuss whether the film is literally dogmatic, or is it a secular film, and many people discuss the ending, which has a surprising element to it.”

Fluk got the idea for “The Ticket” while working on his first film. He was sitting in editing when the video stopped working, and all he could hear was the sound while watching a black screen.

“There was something so beautiful about it, just listening to the sound of the film,” Fluk said. “There was such a strong narrative within it, even without sight.”

He immediately called Mashihi with the idea for a movie about a blind man regaining his sight. The original idea was to start the first five minutes in pure darkness, but “good luck getting a movie produced like that,” Fluk said.

Instead they experimented with sight and sound, shooting through tanks of liquid to get the sort of textures of light and color that visually impaired people see. “You shine lights through the other side to gain this sort of organic texture. At one point, we even used sea monkeys, because they kind of look like the things floating when you close your eyes,” Fluk said.

In making the film, Fluk and the actors interviewed visually impaired people and ophthalmologists, and observed and learned. One woman’s story of regained sight helped them shape the visual tone of James’s arc as he regains and loses his sight again. As Fluk learned, there are many different types of visual impairment. And it was important for Fluk and the actors to capture the portrayal of someone visually impaired without overdoing it and creating a caricature.

He split the film into camera acts, with a different type of camera used for each portion of the story. The murky world becomes one drenched in color before everything fades away again. “The style of shooting, the color scheme, the way the camera moves, the kind of lens and aperture we used, would all address the protagonist’s arc throughout the story,” Fluk said.

Sound was a crucial tool as well. “It was really important to me to capture the experience of being very sensitive to sound and hearing everything, and slowly becoming desensitized, and then later on becoming sensitive again.”

In a way, Fluk and his technical team built a sensory environment to mirror James’s arc of emotional or moral sensitivity. When his sight starts to waver and darkness begins to encroach, perhaps everyone but the protagonist sees it coming.