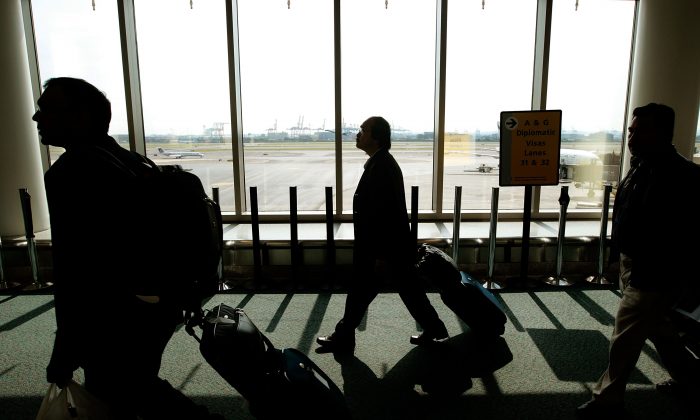 Travels walk toward the passport control line upon arriving at Newark International Airport in New Jersey in this file photo. (Chris Hondros/Getty Images)
US

While the travel restrictions announced by President Donald Trump on Jan. 27 met with immediate contention, there has been little sober discussion about what the president’s policy directive signifies. What it appears to signal is the budding of a new visa-assurance process that looks at whether visa holders believe in the values of the United States.

The 90-day travel ban affects seven countries—Iraq, Syria, Iran, Libya, Somalia, Sudan, and Yemen—using a list drafted by the Obama administration. The thinking behind it is explained in Trump’s executive order, which states: “In order to protect Americans, the United States must ensure that those admitted to this country do not bear hostile attitudes toward it and its founding principles. The United States cannot, and should not, admit those who do not support the Constitution, or those who would place violent ideologies over American law.”

It also says the United States “should not admit those who engage in acts of bigotry or hatred (including ‘honor’ killings, other forms of violence against women, or the persecution of those who practice religions different from their own) or those who would oppress Americans of any race, gender, or sexual orientation.”

The new rules appear to go beyond screening for belief in violent jihadism to also include belief in jihadist struggle and Islamism—neither of which should be confused with the religion of Islam, according to Dr. Zuhdi Jasser, founder and president of the American Islamic Forum for Democracy, and a devout Muslim.

“I think it’s important to look at what we’re dealing with, based on looking at the order itself. I don’t think in reality it’s a Muslim ban,” he said.

I think it’s important to look at what we’re dealing with, based on looking at the order itself. I don’t think in reality it’s a Muslim ban.
— Zuhdi Jasser, founder and president, American Islamic Forum for Democracy

According to Jasser, Islamism is a political movement that adheres to an Islamic party that will institute forms of sharia (Islamic law), and “they believe the state should derive its identity from Islam.” He said this ideology has led to many of the repressive Islamist regimes throughout the Arab world.

This is different from, yet connected to, jihadism, which he said “is the way you domestically or globally achieve those Islamic state ends, through war or through nonviolent struggle.”

Jasser believes the United States is right to screen for Islamism as well as jihadism, noting, “I believe the last eight years have not included any ideological vetting—and they should have.”

Jasser said he doesn’t agree with every part of the executive order, noting that the immediate visa ban, which affected people in transit, may have sent a bad message. He also disagrees with Syria being on the indefinite ban list.

He said many people view America as a place of liberation from theocracy, and that if the restrictions were aimed to limit this, “that would be harmful,” but added, “I don’t think that’s what this is.” Rather, it looks like what Trump says it is: A temporary travel ban on countries that are unstable and have serious terrorist problems.

There are conflicting numbers on how many people in the affected countries have had their visas suspended. It was broadly reported by media (but there don’t appear to be any official statements) that the Justice Department said the number was 100,000, and the State Department followed up by saying less than 60,000 visas were affected. The restrictions only targeted visa holders not already on U.S. soil.

According to Drew Berquist, counterterrorism expert for the intelligence community and founder of security news website OpsLens, the U.S. vetting process for potential terrorists has always been lacking.

People think that everyone has these robust databases and that big Uncle Sam knows everything going on. … It’s more difficult than people think.
— Drew Berquist, counterterrorism expert

“People think that everyone has these robust databases and that big Uncle Sam knows everything going on,” Berquist said. But the reality is much different. “It’s more difficult than people think.”

This point was stated more plainly in the text of the executive order, which notes the United States strengthened its visa-assurance process after the 9/11 terrorist attacks. Before then, it says, the “State Department policy prevented consular officers from properly scrutinizing the visa applications of several of the 19 foreign nationals who went on to murder nearly 3,000 Americans” in those attacks.

It says that based on the “deteriorating conditions in certain countries” caused by war, civil unrest, and other issues, there is now a higher chance that “terrorists will use any means possible to enter the United States.” And in light of this, the United States “must be vigilant during the visa-issuance process to ensure that those approved for admission do not intend to harm Americans and that they have no ties to terrorism.”

Complicating the screening process even more is the fact that there are networks helping terrorists obtain fake travel documents. “ISIS has gotten much better at acquiring those through nefarious means,” Berquist said. Also, for people from some of the more remote parts of those countries, it’s difficult for the government to screen them for potential security threats when they travel.

“We need to figure out better ways to vet individuals coming from anywhere, not just those seven countries,” Berquist said. “I hope the reason behind the temporary halt is to let us figure out how we let people come in here.”

During remarks at the National Prayer Breakfast in Washington on Feb. 2, Trump expanded on the intentions behind the temporary restrictions:

“In the coming days, we will develop a system to help ensure that those admitted into our country fully embrace our values of religious and personal liberty, and that they reject any form of oppression and discrimination.

Robert Spencer, director of Jihad Watch, believes there is an immediate threat and that the president’s orders were warranted.

“The Islamic State has vowed to infiltrate the refugee stream, and European authorities have acknowledged that it has done so,” Spencer said. “The jihadis who murdered 130 people in Paris in November 2015 were all refugees.”

“The choice we face is to ban temporarily some legitimate travelers or to allow in people among whom will almost certainly be some Islamic jihadis,” he added.

Spencer noted that one of the shooters in the 2015 San Bernardino terrorist attack, Tashfeen Malik, was from Pakistan and lived in Saudi Arabia (neither of which is on the temporary ban list). Malik passed background checks from five different U.S. agencies. “Clearly, there need to be restrictions until better vetting procedures can be developed and implemented.”