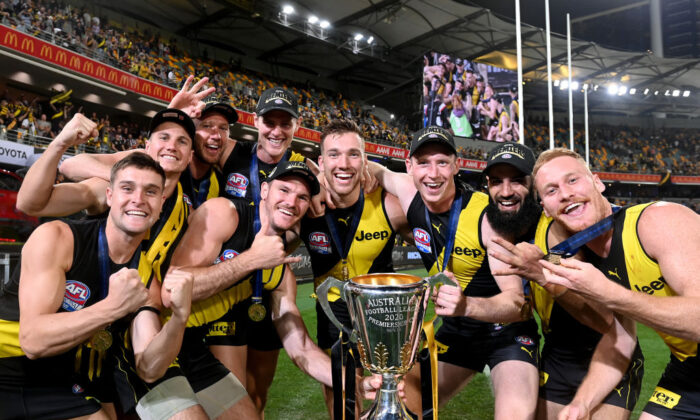 The Tigers players celebrate victory after the 2020 AFL Grand Final match between the Richmond Tigers and the Geelong Cats at The Gabbain, in Brisbane, Australia, on Oct. 24, 2020. (Bradley Kanaris/AFL Photos/via Getty Images)
Viewpoints 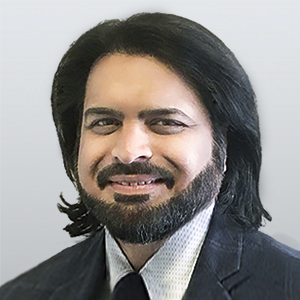 From the Olympians of Greece to the gladiators of Rome, sport has been a feature of organised society since ancient times.

Not only is it crucial for amusement and fitness, but there’s also a deeper reason for its unique place in our psyche.

Humans tend to be both tribal and competitive. The two aren’t just correlated; they actually stand in need of expression.

It just so happens to be that the sporting arena is just about the best alternative to an actual battlefield.

It’s where tribal competition finds a non-military outlet. Thus the most vivid displays of nationalist sentiment are unsurprisingly found on the sporting field.

Australia has always been known as a sporting nation.

Between settlement (1788) and federation (1901), a substantial part of what helped shape the Australian spirit of mateship was genuine bonding over sports.

The summers were for cricket and winters for what came to be known as Australia’s various forms of football-Aussie Rules, Rugby League and Rugby Union. Throw in tennis, soccer and swimming into that mix, and we could just about see how that reputation as a sporting nation makes perfect sense.

As an avid cricket fan, I distinctly recall my teenage years having the privilege of living through Australia’s golden age of cricket from the late 1990s to the mid-2000s. Who could forget the days of the Waugh brothers, Tubby Taylor, Warnie, McGrath and Gilly.

Australia won three one day international Cricket World Cups in a row from 1999, 2003 and 2007. The golden age, in fact, went far beyond cricket.

The electrifying atmosphere and hype around the Sydney 2000 Olympics have also left their marks on our collective psyche.

Yet, in recent years, Australia has seen a decline in its attitude towards sports. A recent Roy Morgan study found that only “one in five Australians now regularly play competitive sports, down from 27 percent in 2001.”

Add to this, we’re also less likely to volunteer for sporting clubs.

Trends like these in organised society neither appear nor disappear out of the blue. This is part of an overall cultural decline in the Australian way of life, and it correlates to another paralysing phenomenon that has been at play across the English-speaking Western world since the end of World War II.

This makes it difficult for individuals with, say, British Isles roots to express any sense of attachment to their English, Scottish, Welsh or Irish ancestries, let alone get away with being tribal and competitive.

Its pervasive impact can also be seen across the highest echelons of university campuses, sections of the press and the political elite.

There is an underlying presumption that the English-speaking Western world is collectively guilty for the perceived and actual wrongdoings of the British Empire.

As a result, many Americans, Canadians, Aussies, and Kiwis have been led to believe that national pride must be kept “in check”; otherwise, they’re automatically “racist.”

Now, rather than doing something that unites all of us before a big game, like singing the national anthem, players and officials often “take a knee” to protest against Australia’s supposed “systematic racism.”

Incidentally, this isn’t expected of all group identities.

Even government agencies like the Australian Human Rights Commission have, at times, taken an overtly political stance on contentious matters such as racism.

Australians are constantly reminded that they belong to a society built on stolen land and institutionalised prejudice towards its native population and migrants.

Those driving this agenda seek for the current generation of Australians to feel perpetual guilt for the perceived and actual actions of earlier generations.

Yet Kevin Rudd’s 2008 apology was a crucial turning point. It set a major precedent for hollow symbolism based on identity politics.

The Adam Goodes incident (2016) only helped reinforce the view that racism was not only built into the nature of Australian society but that the sporting field was one of its greatest manifestations. The end result is that each new generation turns out less tribal, less competitive and ultimately put off from sports.

The fact is that sport was once the thing that brought Australians together as one.

No matter one’s background, be it Christian or non-Christian, Catholic or Protestant, rich or poor, worker or manager, newcomer or native-born, sport was the glue that held Australia’s otherwise disparate society together. It’s where we mixed and mingled with those we otherwise would rarely, if ever see, or talk to.

As is clear from the Roy Morgan data, sport no longer serves this function to the same typical Aussie standards anymore.

This decline in our fondness for sport is part of an overall theme of cultural decline.

With fewer Australians participating in sports as we did in the golden age, there is a need to restore our sense of confidence in ourselves and in our ability to harness competition on the sporting field.

We need to realise the sense of tribalism and competition isn’t a bad thing of itself. It depends on how organised society chooses to harness it.

Not only has sport been a viable outlet for fitness and amusement since ancient Greece and Rome, it still has great potential to bring us all together under that unified spirit of mateship.

That is the essence of the Australian way of life.

Sherry Sufi
Follow
Dr. Sherry Sufi is a senior fellow at the Institute of Public Affairs. He wrote his Ph.D. on language and nationalism.