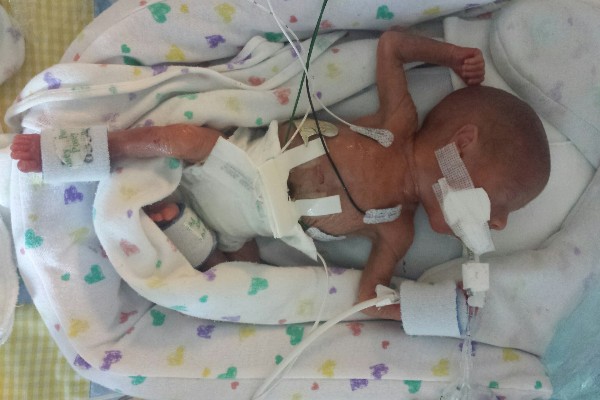 A Washington state couple is preparing for the birth of their second child months after the first twin was born.

Nick and Holli Gorveatt welcomed their first child, Link, on Sept. 29, according to the Evergreen Health Medical Center. The child was born at 23 weeks and weighed just over 1 pound.

Holli Gorveatt went to the Kirkland hospital after her identical twins showed signs of a condition called “twin to twin” syndrome, where one twin draws blood from the other in utero. It can cause health problems, with one becoming bloated and the other getting weakened.

As a result, she gave birth to Link, while the other child, Logan, is in their mother’s womb.

“Logan’s good, so he’s growing a lot and he’s just kicking. He’s got fluid, he can move around. He was stuck before,” she said.

Dr. Martin Walker delivered Link and was able to perform surgery in utero to separate the babies blood vessels.

“It’s rather like having two plants growing out of the same pot,” Dr. Walker explained of “twin to twin syndrome.”

The parents set up a GoFundMe page, and have raised more than $3,000.

They wrote on Oct. 14: “Link is having another stable day. He is tolerating his feedings. Link is now having them every 3 hours at 2cc. This is a huge improvement for him as he was at .5cc every 6 hours days ago.

“Overall Link is growing and he now weighs 650grams. He continues to get steroid shots for his lungs every morning. During the night he is on less oxygen than the night before. Good signs of his lungs improving.”