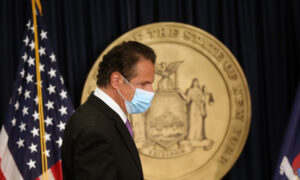 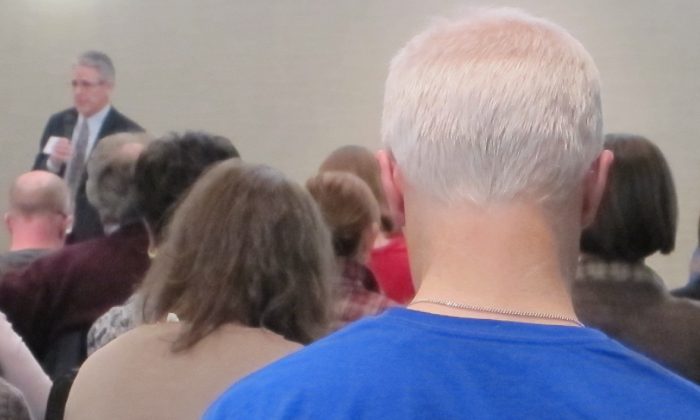 An environmentalist concerned about global warming wears a statement t-shirt at a public hearing on a proposed offshore terminal for imports of liquefied natural gas in Eatontown, N.J., on Jan. 8, 2015. Liberty Natural Gas wants to build the facility off the coasts of New York and New Jersey. (AP Photo/Wayne Parry)
New York

EATONTOWN, N.J.—All that would peek above the ocean waves off New York and New Jersey would be two small buoys tethered to underwater pipes. But they’re already casting a large shadow, with potential effects on the economy of the New York metropolitan area, the marine environment, and even America’s future as a net importer or exporter of energy.

Its stated purpose is to bring additional natural gas into the New York area during times of peak demand, thereby lowering home-heating prices.

Business and labor groups support the plan, which was first proposed in 2008 and is projected to generate 800 construction jobs. But environmentalists, fishing groups, and some elected officials say it is a dangerous, unnecessary project, given that America is awash in large supplies of domestically produced natural gas, much of which is produced in the Marcellus Shale formation just west of New York.

A public hearing on the proposal last week drew more than 1,000 people, many of whom said they fear the project, dubbed Port Ambrose, is really a Trojan horse designed to be switched to an export facility once it is built, to facilitate the sale of gas produced by hydraulic fracturing, better known as fracking, to overseas markets.

“It seeks to bring us liquefied natural gas: a dirty, foreign, expensive fossil fuel that will be a target for terrorism, and threaten fisheries, clean ocean jobs, and tourism,” said Cindy Zipf, executive director of Clean Ocean Action.

Jim Lovgren, who runs the Fishermens’ Dock Cooperative in Point Pleasant Beach, called the proposal “an attempt to turn the ocean waters off New Jersey to Louisiana North. If this project is approved, the oil companies will line up seeking to build their own ports and start exporting the huge Marcellus gas reserves” that are currently being developed using fracking.

Most environmentalists oppose the tactic, which involves pumping chemically laden fluids into underground rock to release natural gas trapped within them. Fracking has significantly increased the supply and lowered the price of natural gas in many parts of the country. The United States is both an importer and exporter of natural gas, although imports have decreased by more than 27 percent from 2008 to 2013, according to the U.S. Energy Information Administration. Over that same period, exports rose 63 percent.

Liberty strongly denies it has any plans to use the terminal to export gas. For one, said Liberty CEO Roger Whelan, the area’s logistics would make it prohibitively expensive.

Luke Jackson, an analyst with Bentek Energy, a unit of the Platts energy information firm, said such a project is not needed in the area right now, given similar terminals that already exist in Boston and Maryland.

“You have tons of shale gas being produced right next door in Pennsylvania, and additional pipeline capacity being added to get that gas into New York City,” he said. “It would honestly make more sense to build an export terminal.”

Liberty’s proposed $600 million privately funded project would bring liquefied natural gas to the terminal from Trinidad and Tobago in specially designed regasification ships that would convert the liquefied fuel back into gaseous form and pump it through undersea pipes connecting to the underwater Transcontinental Pipeline off Long Island. Liquefied natural gas is fuel that has been chilled to minus 260 degrees, turning it into a liquid that is 1/600th the original volume of gas.

The company will negotiate a fixed fee to be paid by the gas supplier. It says each delivery is expected to provide an average of 400 million cubic feet of natural gas per day—enough to meet the energy needs of 1.5 million homes. The majority of these deliveries will occur during the peak demand periods of winter and summer.

Opponents’ safety concerns include the possibility of a so-called “pool fire” from a leak of the liquefied gas into the water, or the formation of a flammable vapor cloud due to a leak. But the agencies concluded “even large flammable vapor clouds would not reach the shore and impact population areas.”

The agencies also said precautions would be taken against a terrorist attack, though they did not make those steps public for security reasons. An exclusion zone of 2.4 square miles would apply to vessels not affiliated with the project, but because the buoys would be 27 miles from the mouth of New York Harbor, that should not harm shipping, the agencies said.