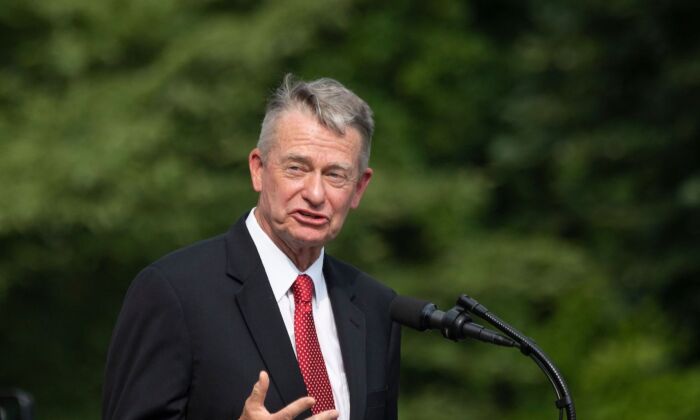 Idaho Gov. Brad Little on Oct. 6 issued an executive order that repealed an order handed down by Lt. Gov. Janice McGeachin a day earlier that would have expanded a ban of COVID-19 vaccine passports in the state.

“Today, as Acting Governor, I fixed Gov. Little’s Executive Order on ‘vaccine passports’ to make sure that K-12 schools and universities cannot require vaccinations OR require mandatory testing. I will continue to fight for your individual Liberty!” McGeachin wrote in a Twitter post.

In Idaho, when the governor is out of the state even for a brief period of time, the lieutenant governor becomes acting governor.

McGeachin, a Republican who is running for governor, had issued the order and sought to activate Idaho’s National Guard and send them to the U.S.–Mexico border amid a surge of illegal immigration. Little, also a Republican, was in Texas this week to meet with other GOP governors to discuss concerns about border security.

In a statement, Little said that he hadn’t authorized McGeachin to act and claims that Idaho state law prohibits her from doing so. The state Constitution, however, requires the lieutenant governor to act as governor when the chief executive leaves the state.

“I am in Texas performing my duties as the duly-elected governor of Idaho, and I have not authorized the Lt. Governor to act on my behalf,” he said in a statement.

The governor’s temporary presence in “Texas on official business” does not “impair my ability to represent the people of Idaho thus necessitating action by another executive to ensure the continuity of state government,” Little’s executive order said (pdf), which noted that he had previously banned state governments from requiring vaccine passports earlier this year.

The order argued that those who authored Idaho’s state Constitution “did not permit, nor would they now sanction, a lieutenant governor’s actions to subvert or supplant the policies of an otherwise capable, qualified, and duly elected governor.”

Idaho House Speaker Scott Bedke, a Republican, criticized McGeachin, who is running on the campaign slogan “Make Idaho Free Again,” and asserted that she was abusing her office to try to drum up election support.

McGeachin’s office didn’t immediately respond to a request by The Epoch Times for comment.