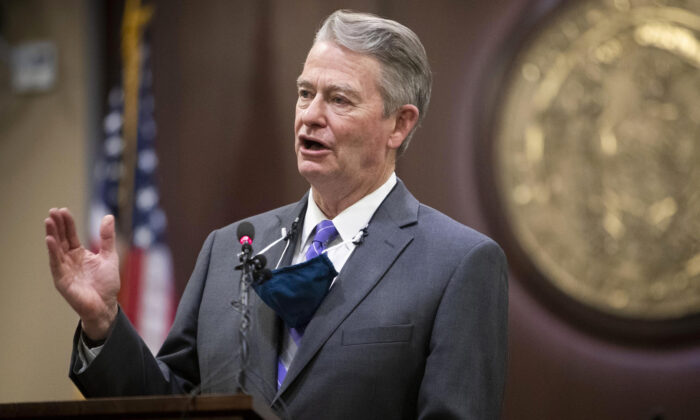 Idaho Gov. Brad Little gestures during a press conference at the Statehouse in Boise, Idaho, on Oct. 1, 2020. (Darin Oswald/Idaho Statesman via AP)
AMERICA

Idaho Gov. Brad Little has announced that he has reactivated the National Guard and has directed up to 370 additional personnel to support state hospitals amid a surge in COVID-19 cases in the state.

The Republican governor said in an Aug. 31 statement that just four intensive care unit beds out of nearly 400 were available in the entire state, noting that there were more COVID-19 patients in ICU beds in Idaho “than ever before” and that “the vast majority of them are unvaccinated.”

“Where hospitals have converted other spaces to be used as contingency ICU beds, those are filling up too,” Little said.

“We are dangerously close to activating statewide crisis standards of care—a historic step that means Idahoans in need of health care could receive a lesser standard of care or may be turned away altogether. In essence, someone would have to decide who can be treated and who cannot. This affects all of us, not just patients with COVID-19.”

As part of the Aug. 31 order, 370 personnel will be deployed statewide, including up to 150 guardsmen to “support short-staffed medical facilities.” They’ll be tasked with logistical support, such as screenings, lab work, and other duties, the governor said.

Another 200 medical and administrative personnel will be made available to the state through a contract with the General Services Administration, and a 20-person Department of Defense medical response team will be deployed to North Idaho, where vaccination rates are among the lowest in the state.

“It was shameful for Brad to suggest today that Idahoans must make a specific medical choice in order to show love for their neighbors,” McGeachin wrote on Twitter. “You can love your neighbor and still make medical decisions that are right for you. I trust you to make your own health choices.”

According to the Centers for Disease Control and Prevention, as of Aug. 31, approximately 44 percent of the state’s total population had received at least one vaccine dose, with 39 percent fully vaccinated against COVID-19, the disease caused by the CCP (Chinese Communist Party) virus.

“Those who have made the personal medical choice not to take this vaccine deserve to have their decisions respected,” McGeachin said, according to the Idaho Statesman.