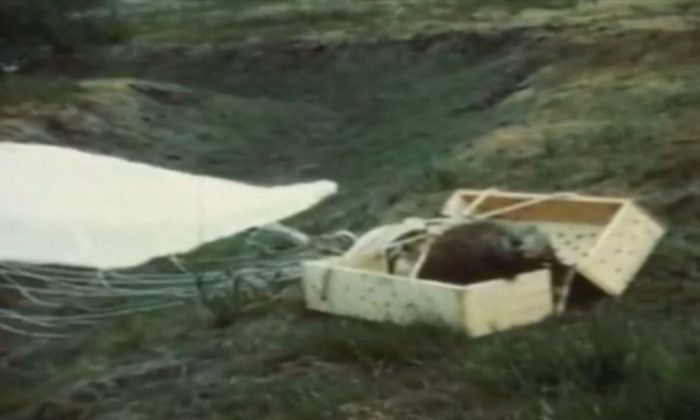 BOISE, Idaho (AP) — More than half a century after a group of beavers parachuted into the Idaho backcountry, officials have uncovered footage of the quirky wildlife management moment.

The Idaho Department of Fish and Game was struggling with an overpopulation of beavers in some regions in the 1940s when wildlife managers settled on a novel idea. They captured beavers and other furry rodents, packed them into special travel boxes, attached parachutes and dropped them from a plane into the Frank Church River of No Return Wilderness.

Animal lovers, take heart — it appears all the beavers made it through their flying adventures unharmed.

The film made around 1950 and dubbed “Fur for the Future” showed the infamous beaver drops, but it had long been lost, Boise State Public Radio reported Thursday (http://bit.ly/1M8QE9U ).

Fish and Game historian Sharon Clark recently uncovered the fragile film, which had been mislabeled and stored in the wrong file. It has been digitized and released on YouTube by the department and the IdahoHistorical Society.

“We haven’t done airplane drops for 50-plus years, but it apparently worked pretty well back then to re-establish them in remote places,” said Steve Nadeau, Fish and Game’s statewide fur bearer manager.

The agency now moves beavers to the Owyhee desert, in the state’s southwest corner, to help restore vegetation stripped away by years of watershed use. Nadeau says the goal is for beavers to make ponds in the region, which can hold water year-round.