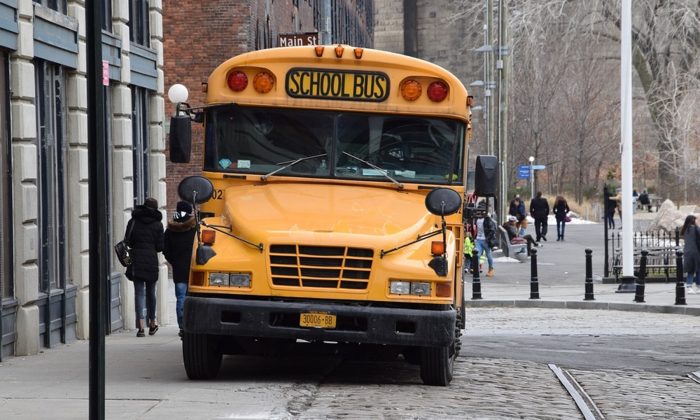 Harrowing video footage shows the moment children on a school bus plead with their driver to stop.

The reason for their distress is because driver, Martha Thompson, was operating the motor vehicle with a 0.15 blood-alcohol content, according to reports. That’s nearly twice the legal limit.

Thompson later pleaded guilty to driving while intoxicated as well as 37 counts of reckless endangerment, which is one count for each student on the bus, CBS reported.

The children said that the 55-year-old reached speeds of up to 70 mph and hit a mailbox.

In the video, the children appear visibly distressed before one student goes to tell the driver to halt the vehicle.

Then, the children open the emergency door in the back of the bus and depart. One girl in a sweatshirt is seen calming down the younger children.

Grace Scherzer, 16, Chelsey Pierce, 15, were reportedly instrumental in getting the driver to stop the bus, CBS noted. They said the driver didn’t face a steep enough penalty for her actions.

The driver reportedly got only six months of electronic home monitoring, five years of probation, and alcohol counseling. An attorney for the former driver, Thomas Trvbovich, said Thompson was “embarrassed. She’s very sorry to the children. She never, ever would intentionally put any of those children … in any type of risk.”

“I am outraged. I am very upset with what she received. And I just don’t think it’s a harsh enough punishment for this woman. She put all these children’s lives in danger. She could have killed them all. I’m very upset with the outcome,” Lori Loomis, a parent of one of the children, said.

Meanwhile, a number of people praised the two girls for their actions.

“That young girl that comforted those little kids is so mature and amazing!!! and the one that was brave enough to open the back and lead the kids off did a good job too!!!” one person wrote.

Another said, “Those three girls are live savers. Who knows what the driver could have done.”

Wrote a third, “The girl in the grey hoodie is doing a great job with helping the kids.”

Another Case: Bus Driver Kicks Everyone Off

One unnamed Parisian bus driver helped turn a vexing commuting experience of a passenger with special needs into a pleasant one.

On Oct. 18, François Le Berre, who has multiple sclerosis, was waiting to board a bus from 17th arrondissement in Paris. However, he was having trouble getting onto the bus, as the passengers on board were seemingly reluctant to move up to make room for him.

The behavior  of the passengers apparently irked the RATP driver, who stood up and ordered everyone to get off.

“Everyone did it, but some people did grumble a bit,” Le Berre said.

According to Le Berre, the driver then told the passengers, “Everyone might need a wheelchair one day.”