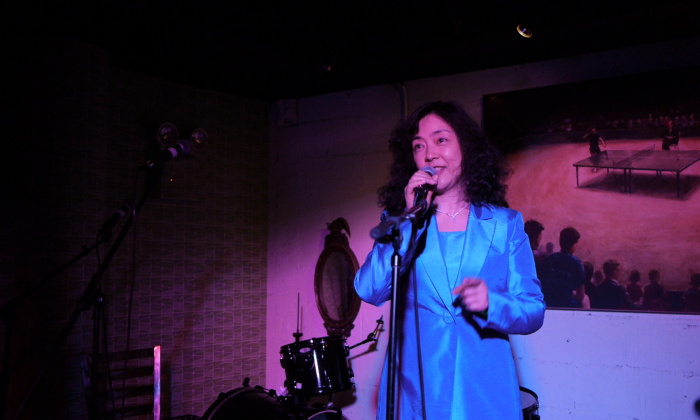 NEW YORK—Using a phone number she found on a website prior to escaping from China to Melbourne, Australia, religious freedom asylee Jennifer Zeng made the call for help.

Kate Vereshaka, a fellow practitioner of Falun Dafa (also known as Falun Gong), answered and immediately agreed to pick up the slave labor camp survivor Zeng the next day.

A relative was so scared of the Chinese regime’s ability to harm, even in Australia, that Zeng was dropped off at a dark railway station to be picked up. She related the story to an audience at ICONS Unite Be the Voice of Freedom Concert on May 19 at SPiN, Susan Sarandon’s Ping Pong Social Club in Manhattan.

Vereshaka’s name had come from a public list of volunteer contacts for the spiritual practice of Falun Dafa, which is free to learn and is based on the principles of truthfulness, compassion, and tolerance.

Falun Dafa has faced a brutal persecution in China since 1999, according to the Falun Dafa Information Center, the official media center for Falun Dafa. Chinese authorities tortured Zeng in an attempt to force her to renounce her belief before she escaped and wrote a book about her experiences.

Later she was featured in the award-winning film, “Free China: The Courage to Believe,” directed and produced by Michael Perlman of World2Be Productions, and Kean Wong of independent broadcaster NTD Television.

Years after meeting Zheng, Vereshaka started a band where she raises awareness about the suffering of practitioners like Zeng in China. Vereshaka performed at the concert on Sunday night, an event that brought the two women’s intertwined lives full circle.

The audience was treated to six musicians and bands in all, including Vereshaka’s band Belle, and a surprise erhu (known as a Chinese violin) performance by world-class artist Mei Xuan.

The ICONS event was billed as a platform to celebrate freedom of belief, speech, and the abolishment of human trafficking.

It served multiple purposes and had much to promote and to celebrate, including ICONS Unite’s YouTube launch featuring 12 heart-centered musicians and bands, and “Free China’s” upcoming theatrical release in New York on June 7.

“This film is historic, and it is going to change the lives of 1.3 billion people [in China],” said event host James Houston White.

Tony Chen, the award-winning composer of the “Free China” film soundtrack, said, “When you see hope in music it gives you a feeling you can solve your problems.” He added that musicians should think of others first and help people in a positive way.

Perlman said he was first an activist, then a musician, and then a filmmaker. “Music is a channel to express the things close to my heart in an emotional way,” he said. Perlman performed with his New York-based activist band Rejectionist Front.

“It is in our own self-interest to know about ‘Free China,’ because if we buy goods from China, we walk around with blood on our hands, and we don’t even know,” said Perlman of the film.

He said that Zeng’s story worked for the film because everyone can relate to a mother’s struggle and he wanted to appeal to everyone, including people “who couldn’t find China on the map.”

He added, “It is the same thing that everyone can relate to music.”