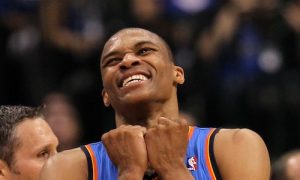 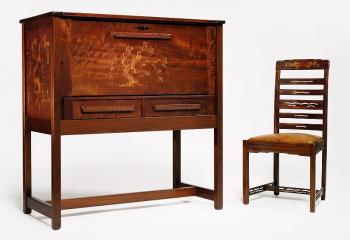 PRATT DESK: This set was custom designed by Greene & Greene at the peak of their designing careers, and is now considered an icon in American design during the Arts and Crafts movement. (Courtesy of Sotheby's)
Home

By Katy Mantyk and Nick Mclaughlin
biggersmaller
Print
NEW YORK—An auction of “Important 20th Century Design” at Sotheby’s New York on Dec. 16 will feature a Pratt Desk and Chair with an estimated value of around $4 million. Made by Greene & Greene, it is considered an icon of American furniture from the height of the Arts and Crafts movement.

The Desk and Chair is from the Pratt House and was the fifth and final of Charles and Henry Greene’s “Ultimate Bungalows.” The series made them among the most important architects of the 20th century, and the desk and chair set, custom made for the home, is considered their masterwork, embodying the architects’ style at their pinnacle. The sale of it in 1985 set what became a 15-year auction record for Greene & Greene when it was purchased by the present owner, according to Sotheby’s.

“We are honored to offer a work of this magnitude,” said Jodi Pollack, Director of Sotheby’s 20th Century Design Department in a release. “Nothing like the Pratt Desk has come to market in the last 25 years. The importance of this offering is a combination of the desk’s extraordinary workmanship, freshness to the market, and condition.”

Brothers Charles and Henry Greene founded the architecture firm Greene & Greene in 1894. They were skilled in woodwork and metalwork, and had a passion for Chinese and Japanese design.

“During the first decade of the 20th century, Greene & Greene developed a unique architectural style, ‘a new and native beauty,’ by fusing elements from the Arts & Crafts movement and Japanese imperial buildings and temples … Finally, adding a unity of design concept, seldom seen before or since, resulting in the iconic forms for which they are remembered today,” according to the Arts and Crafts Movement website.

At the pinnacle of their careers, the Greenes built five “Ultimate Bungalows.” The Pratt house was the fifth and final of the “Ultimate Bungalows.” In 1908 it was commissioned as a winter home for Charles M. Pratt, an oil industrialist and member of the family that founded the Pratt Institute, and his wife, Mary Seamoor Morris, daughter of the governor of Connecticut.

The furniture for all the “Ultimate Bungalows” was custom designed specifically for each home, and constructed by Greene & Greene’s master cabinetmaker, Peter Hall.

The Pratt desk was designed for the living room, described by Sotheby’s as a tour-de-force that stands today as the most important piece of furniture the architects created. The desk embodies the Greenes’ defining design principles, “with a purity of proportion, form, and line that is balanced by sumptuous textural enrichments,” according to Sotheby’s. Hand-carved wood inlays on the exterior of the desk articulate gnarled oak trees in bas-relief, inspired by the surrounding landscape of the Ojai valley in California.

The contents of the Pratt House were disassembled in 1985, with the majority of the furniture auctioned the same year by Christie’s. The Pratt Desk and Chair have been in a private collection since 1985.

The Arts and Crafts Movement

During the latter half of the 19th century in England and America, the Victorian style of heavy ornamentation and busily decorated interiors prevailed in middle-class homes. The industrial revolution at that time meant mass production, and lead to a loss of individualism and appreciation of quality craftsmanship. The Arts and Crafts movement was a direct rejection of all that.

According to the Arts and Crafts Society website: “William Morris, the British poet, artist and architect rejected this opulence in favor of simplicity, good craftsmanship, and good design. The Arts & Crafts Movement was born.”

Although the British and American proponents of the movement shared the same philosophy, when it came to the execution, stylistically there were great differences.

“The British movement focused on the richly detailed gothic style,” explains the website, which ended up being costly to hand produce and unaffordable to the common man, limiting it to the upper-class.

“In contrast, the American movement drew inspiration from the materials, choosing to highlight the grain of the wood or the form of the pot. They incorporated walls of rich wood tones…. Furniture and architectural details were designed to take advantage of machines allowing the individual craftsmen to assemble the furniture and finish the wood. The use of machines lowered the cost, making the furniture, pottery and metalwork affordable and therefore available to ‘the people,’” according to the website.