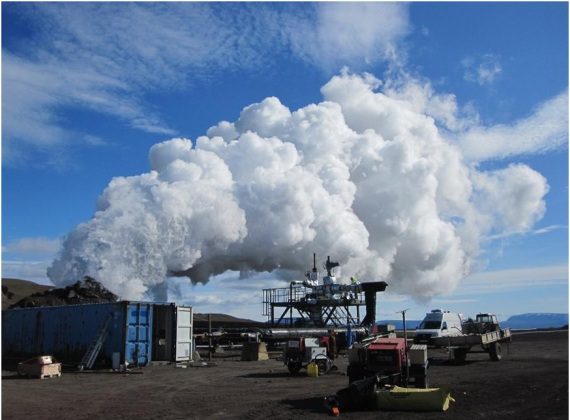 Engineers drilling in Iceland several years ago were stunned to realize that they had broken into a magma-filled chamber about three miles below the Earth’s surface, in only the second time magma had been reached in the history of modern drilling.

The first time it happened, in Hawaii in 2007, engineers plugged the hole with concrete.

But in Iceland, the land of geothermal energy abundance, they left the hole partially open to see if it could be used for geothermal research.

In a new study published this week, researchers say that it can indeed be used for improving geothermal energy production.

“The success of this drilling and research is amazing to say the least, and could in the near future lead to a revolution in energy efficiency in high‐temperature geothermal areas of the world,” the researchers with the Iceland Deep Drilling Project said.

The performance was drawn from being able to drill down into the molten magma and control it; pumping cold water into the hole to connect the hole with the colder environments above; and set steel casing down to the bottom of the hole.

Lastly, they allowed the the hole “to blow superheated, high pressure steam for months at temperatures over 450 °C, beat the world record for geothermal heat as this well was the hottest in the world and one of the most powerful.”

Although the hole is currently unusable, the research is prompting the project engineers to repair the hole and drill a similar hole at Reykjanes.

The process of exploration was in itself very instructive and produced research that was published in the journal Geothermics.

Lessons from drilling will also be applied by the National Power Company.

Wilfred Elders, professor emeritus of geology at the University of California, Riverside, co-authored three research papers in the Geothermics special issue that describes the research.

“Essentially, IDDP-1 is the world’s first magma-enhanced geothermal system, the first to supply heat directly from molten magma,” he told the Conversation.

The combination of natural energy forces should hearten proponents of them, particularly in Iceland, where a large percentage of the nation’s energy comes from geothermal sources.