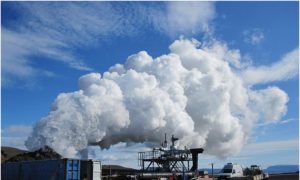 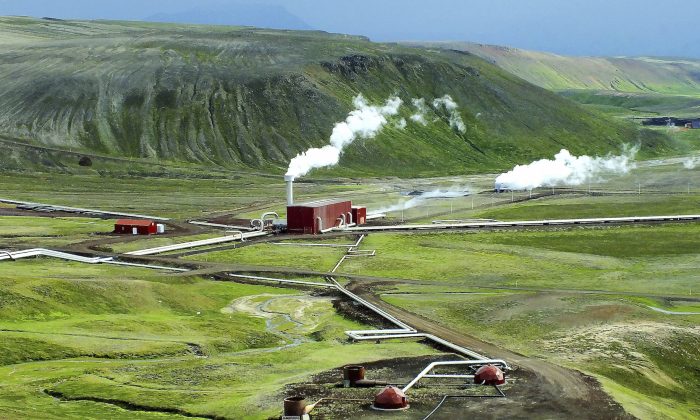 Iceland Hits the Geothermal Jackpot. Is Japan Next?

Iceland has been using geothermal energy to generate electricity for decades. In 2008, however, engineers discovered a reservoir of extremely hot water that has the potential to greatly expand geothermal electricity output.

Now geoscientists have for the first time produced a realistic simulation of how such reservoirs are created. They predict these natural phenomena are widespread in volcanic areas, such as Japan and New Zealand.

Icelandic researchers working on the Iceland Deep Drilling Project (IDDP) made the discovery while drilling a 5-kilometer (about 3-mile) borehole on the Krafla lava field. The drill got stuck just 2 kilometers (a bit more than a mile) down. They ran into the same problem with a second borehole. Both times, their drilling head came up against what geologists call a magmatic intrusion: a rising mass of viscous magma that remains stuck in the bedrock rather than breaking out at the surface.

Geysir Geothermal Area, Haukadalur Valley, The Golden Circle, Iceland
$15 Trillion Plan Would Have All of America on Renewable Energy by 2050

Directly above the magma chamber, the researchers located a unique geothermal reservoir of water: one in which temperatures reached 450 degrees, a state, which scientists refer to as supercritical.

Water becomes supercritical when heated above 374 degrees, from which point it starts behaving like a mixture of the gas and liquid phases. The two phases become inseparable and indistinguishable, resulting in a fluid that can be as dense as a liquid but at the same time flow as easily as a gas.

Water that has been heated by the magmatic intrusion to a supercritical temperature contains enough thermal energy for a single borehole to provide 35 megawatts of electrical capacity. In comparison, today’s standard geothermal boreholes have a capacity of 3 to 5 megawatts; a whole series of boreholes must be connected in a circuit to form a power station with a capacity of 50 to 100 megawatts.

In 2011, two years after this unusual energy source was discovered, the IDDP consortium began conducting tests at the borehole to determine if it was a freak of nature, or might such reservoirs be more widespread than people had assumed?

Three ETH Zurich geoscientists decided to simulate this unusual geothermal system using a new computer model—and now they understand how it occurs, under what conditions it can arise, and where to look for other such systems. Their results and the associated modeling have just been published in Nature Communications.

“The simulations offer a realistic representation of this reservoir’s behavior, even though we kept the model as simple as possible and built in only a few parameters,” said Thomas Driesner, a senior lecturer at ETH Zurich’s Institute of Geochemistry and Petrology, adding that the most satisfying thing about the simulations was that they reproduced what the Icelandic IDDP researchers had observed at the borehole.

At 1,000 degrees, the magmatic intrusion is absolutely impermeable to water. Driesner’s doctoral student Samuel Scott was able to use the simulations to show that a decisive factor in the formation of such a geothermal reservoir is the permeability of the surrounding rock.

If it is highly permeable, then water can rise through it without difficulty—transporting heat away from the intrusion more effectively and hence cooling the magma more quickly. But if the surrounding rock is only slightly permeable, the water remains trapped above the intrusion, which can then heat it up to beyond its critical point.

Why Basalt Is Ideal

The permeability of the rock in the direct vicinity of the magma is key. Here, where temperatures and pressures are high, the mode of deformation of the host rock shifts from brittle fracturing to plastic flow, causing cracks and fissures through which water might flow to close up.

The temperature at which this occurs will determine how hot the water can get. Different types of rock begin to exhibit plasticity at different temperatures. While basalt, a typical volcanic rock, becomes plastic and impermeable at around 500 to 800 degrees, this transformation occurs in more silicon-rich granite at just 350 degrees.

In other words, if the rock surrounding a magma intrusion is basaltic, then there’s a good chance that such a geothermal reservoir might form.

“That’s why we expect this type of heat reservoir to be more common than previously thought in volcanic areas such as Iceland, New Zealand, or Japan,” concluded the researchers based on their modeling.

“The model gives us some idea of the criteria by which these zones develop—and how to recognize them,” Driesner explains, adding that while natural situations are certainly more complex, the model is nonetheless a good tool and will make it easier to find this type of energy source.

Now the researchers are also looking to expand this method. As part of a Sinergia project with funding from the Swiss National Science Foundation (SNSF), they want to work closely with geophysicists to find out whether these reservoirs can also be detected using seismic techniques.