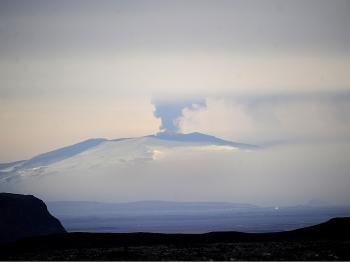 Ash and smoke bellow from the Eyjafjallaj&#246kull volcano as the volcano is seen from Vestmannaeyjar, Iceland, on April 20, 2010. (Emmanuel Dunand/AFP/Getty Images)
Opinion

Trapped Between Fight and Flight

A bitter irony then that those holidaying to find such rarities should be stranded by the very volcanic ash that brought these things to those of us who stayed home.

As many Londoners celebrated the clear skies and the silence hanging deliciously over the usually air-traffic addled skies they were rebuked sharply by those who are stranded abroad, and those who worry about the economic fallout.

But, with all due concern to those trapped, it isn’t churlish to discuss how the fallout from the volcanic ash plume—both good and bad—has brought into sharp relief many aspects of our globalized world.

Of course, even the best holiday destinations can’t guarantee the unique purple hint of a volcanic ash-brushed evening sky, but this temporary reversal of the fortunes has made concrete how topsy-turvy, inside-out and back-to-front our globalized existences have become.

The situation epitomizes how we are increasingly caught in an arms race between fight and flight. We go on holiday to escape the stress of the lives that we have collectively created. And yet part of that stress is the byproduct of our collective attempts to escape it.

We bemoan the overhead jet engine that drowns out the important call, cursing our rising stress levels, and in the next minute search the internet for flight deals to get away from it all.

Of course, all this is a vast oversimplification, but standing under a peaceful city sky, you feel that the treadmill has just slowed down a little—somehow you don't have to run quite as hard to stand still.

You begin to wonder: in how other many ways has our increasingly globalized humankind gradually, unconsciously, set itself against itself in its blind pursuits of progress?

Stepping into the back-garden, there is a sound that many of us have not heard since childhood: of nothing. Without the vapor trails, the clear spring skies are cast a rare and pure blue. No dark foreboding clouds of ash; perhaps just the hint of a teasing grey sprinkle that looks indistinguishable from the dust of the city streets. It is a new pleasure to be outside in the city.

And yet at the same time, the peace is kind of eerie—there is a strange sense of portent that comes only with a sudden change in the long-established status quo. Like the eye of the storm, or the silence of a evacuation, the silence that hangs above bristles with of the power of nature.

No doubt as time moves on the question will increasingly become whether or not this temporary quiet was really in fact an overreaction, the most extreme example of a too great caution about things.

Any yet, this event shows us once again the fragility of our human existence—and the even greater fragility of our blind reliance on globalization and technology. This ash-spewing upstart is apparently only the little sister of a much bigger brother in Iceland whose once-a-century eruption is due any time soon.

What other disasters await in the wings to test global-kind and its reliance on technology? Are we really ready?