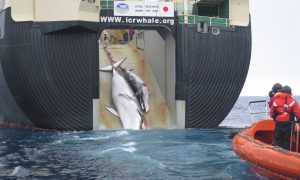 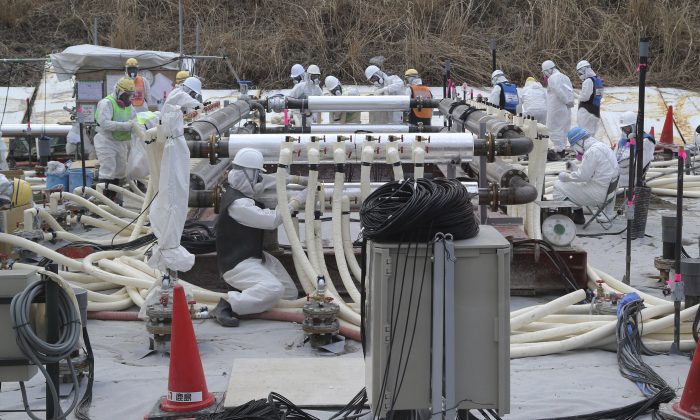 In this March 10, 2014 file photo, workers wearing protective gears install a trial model of the underground frozen wall at the Fukushima Dai-ichi nuclear power plant in Okuma, Fukushima prefecture, northeastern Japan in their attempt to stop the leakage of radioactive water that has accumulated at the crippled nuclear power plant. (AP Photo/Koji Sasahara, Pool)
Asia & Pacific

Ice Wall at Fukushima Plant Switched On, but Will It Work?

TOKYO—The operator of Japan’s destroyed Fukushima nuclear plant switched on a giant refrigeration system on Thursday to create an unprecedented underground ice wall around its damaged reactors. Radioactive water has been flowing from the reactors, and other methods have failed to fully control it. The decontamination and decommissioning of the plant, damaged by a massive earthquake and tsunami in 2011, hinge of the success of the wall.

A. Engineers installed 1,550 underground refrigeration pipes designed to create a 1.5-kilometer (0.9-mile) barrier of frozen soil around four damaged reactor buildings and their turbines to control groundwater flowing into the area and prevent radioactive water from seeping out. The pipes are 30 meters (100 feet) deep, the equivalent of a 10-story building. Engineers say coolant in the pipes will freeze the surrounding soil to minus 30 degrees Celsius (minus 22 Fahrenheit), creating the wall over several months.

Q. WHY IS AN ICE WALL NEEDED?

A. The cores of three of the damaged reactors melted during the accident and must be cooled constantly with water to keep them from overheating again. The cooling water becomes radioactive and leaks out through damaged areas into the building basements, where it mixes with groundwater, increasing the volume of contaminated water. Nearly 800,000 tons of radioactive water have been pumped out, treated and stored in 1,000 tanks that now occupy virtually every corner of the Fukushima plant, interfering with its decontamination and decommissioning and adding to the risk of further leaks of water into the nearby ocean.

Q. ARE THERE RISKS?

A. Construction officials say the coolant is environmentally safe. There were doubts that the huge refrigeration system could effectively freeze the soil while groundwater continues to flow in the area. The operator, Tokyo Electric Power Co., says results from a test of part of the wall last summer were mixed but suggest the system has sufficient capability. Experts are also concerned that an ice wall cannot be adjusted quickly in an emergency situation, such as a sudden increase in the flow of contaminated water, because it takes several weeks to freeze or melt. Electrical costs for running the refrigeration system could be steep. TEPCO says the wall, once formed, can remain frozen for up to two months in the event of a power failure.

Q. WHO MADE THE ICE WALL?

A. The 35 billion yen ($312 million) project was funded by the government and built by Kajima Corp., which has used similar technology in smaller projects such as subway construction. The wall was delayed by technical uncertainties and was finished last month, a year behind schedule.