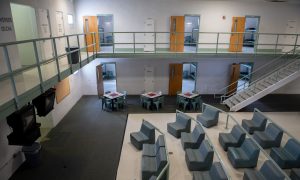 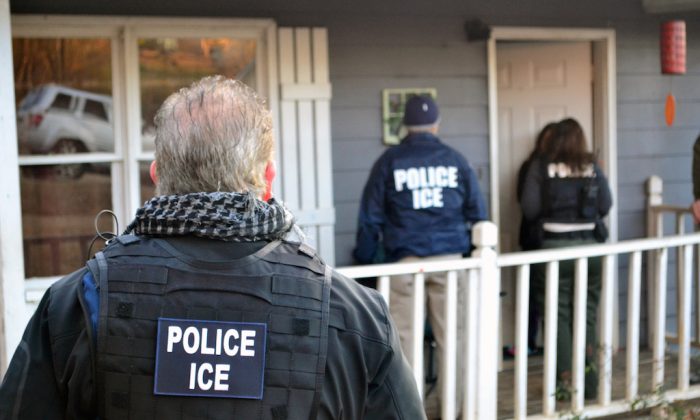 Foreign nationals are being arrested during a targeted enforcement operation conducted by ICE aimed at immigration fugitives, re-entrants, and at-large criminal aliens in Atlanta, Georgia, on Feb. 9, 2017. (ICE)
Crime and Incidents

U.S. Immigration and Customs Enforcement (ICE) released 107,000 illegal alien family members into the interior United States in the three months since Dec. 21, 2018, according to Nathalie Asher, the assistant director of the agency’s enforcement and removal operations unit.

The releases are due to the “catch-and-release” practice often criticized by President Donald Trump, coupled with a recent surge of families crossing the southwest border.

“I don’t have a comparison to what it was last year, but I think we can all agree that it was nowhere near this number,” Asher said on a call with reporters.

ICE has only 2,500 beds to detain alien families in the interior. Those beds are dedicated to specific family units, such as a family headed by a single mother. The other immigrants are quickly released into the interior.

Asher said that the drop is due to ICE having to shift resources to the “absolutely unprecedented” crisis on the southwest border.

“I have had to redirect resources in response to the southwest border influx of this growing number of particularly family numbers that are coming into the United States,” Asher said.

Asher explained that the removals have increased while arrests dropped, because ICE is deporting aliens on behalf of Customs and Border Protection (CBP), which is dealing with a surge of illegal crossings on the southwest border. ICE executed 41,210 removals for CBP in the first quarter of the fiscal year 2019, up from 36,272 at the same time last fiscal year.

The number of removals in 2019 is still down from peaks in 2012. According to Asher, the difference is due to more people fighting their cases in court and claiming credible fear of returning to their home countries. As a result, potential removals can be delayed by up to four years.

“Individuals are going to fight their case to the end, quite frankly, and not so readily take their removal orders,” Asher said.

In the meantime, the number of aliens requesting to post bond and be released from detention is growing rapidly, with nearly 4,000 such cases every week. The backlog of cases with illegal aliens out of detention has grown to over 800,000 cases, Asher said.

“All of those cases–fighting a case, claiming fear, perhaps setting bond and being able to move to a non-detained docket–these are all factors to cases no being adjudicated as quickly or perhaps prolonging the removal number,” Asher said.