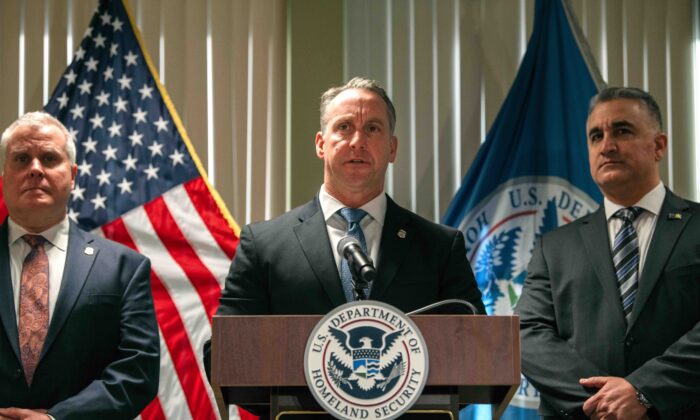 Immigration and Customs Enforcement (ICE) on Jan. 17 issued a list of illegal immigrant fugitives who have been released into the city despite requests from ICE to take them into custody for deportation.

Matthew Albence, the acting director of ICE presented the list to reporters at a press conference in New York where he also blamed the “sanctuary policies” of New York City for the sexual assault and killing of a 92-year-old woman in January.

Maria Fuertes was reportedly sexually assaulted and killed in January as she walked near her home in Queens.

A 21-year-old man, Reeaz Khan, was arrested by NYPD on Jan. 10 and charged with murder, sexual abuse, contact by forcible compulsion, and sexual abuse of Fuertes.

He had previously been apprehended in November on charges of assault and criminal possession of a weapon after allegedly beating up his father.

However, Khan was later released despite immigration officials filing a “detainer” request with the New York City Police Department asking that he be turned over for deportation.

92-Year-Old Woman Murdered by Illegal Immigrant Who Should Have Been Deported: ICE Chief

The acting director said that Fuertes’s death could have been prevented if city officials had complied with a federal request to turn over the assailant, a Guyanese national, for deportation.

The NYPD have disputed ICE’s claims and said it didn’t obtain a “detainer in regard to this individual,” according to The New York Times.

“As a 25-year law enforcement professional, it is unbelievable that I have to come here and plead with the city of New York to cooperate with us to help keep this city safe,” Albence said.

“Make no mistake, it is this city’s sanctuary policies that are the sole reason this criminal was allowed to roam the streets freely and end an innocent woman’s life,” he added.

“These policies, plain and simple, both here and elsewhere in the country, make all of us less safe, which is the opposite of what the primary goal of what every law enforcement officer, every agency, and every elected official should be.”

The list of fugitives that Albence shared include suspected illegal immigrants from Nigeria, Mexico, the Dominican Republic, Honduras, Guinea, Spain, and El Salvador. Those released have arrests for assault in the first, second and third degrees, attempted robbery, criminal possession of a weapon, gang assaults, and other violent offenses, according to Fox.

“All you need to do is call us before you release them. A phone call, one simple phone call, and Maria Fuertes would be alive today. These are preventable crimes people, and most importantly preventable victims,” Albence said.

He added that of the 7,526 “detainers” that have been rejected by NYC officials, roughly 200 were for suspected murderers.

A detainer is a formal request from ICE for local law enforcement agencies to provide notification to ICE before releasing an individual in custody, and to hold them for 48 hours beyond the scheduled time of release, so that ICE has time to take the individual into immigration custody.

ICE lodges detainers on individuals who have been arrested on criminal charges and who it has probable cause to believe are removable aliens.

However, when law enforcement agencies fail to honor immigration detainers and release serious criminal offenders onto the streets, it undermines ICE’s ability to protect public safety and carry out its mission, the agency says.

Mayor Bill de Blasio has spoken in defence of New York City’s sanctuary policies, saying that it has “kept us safe” and noting that there are 177 crimes for which the city will cooperate with federal immigration enforcement.

“New York City has passed its own common-sense laws about immigration enforcement that have driven crime to record lows. There are 177 crimes under NYC law that trigger cooperation with federal authorities, if and when someone is convicted,” he said on Twitter.