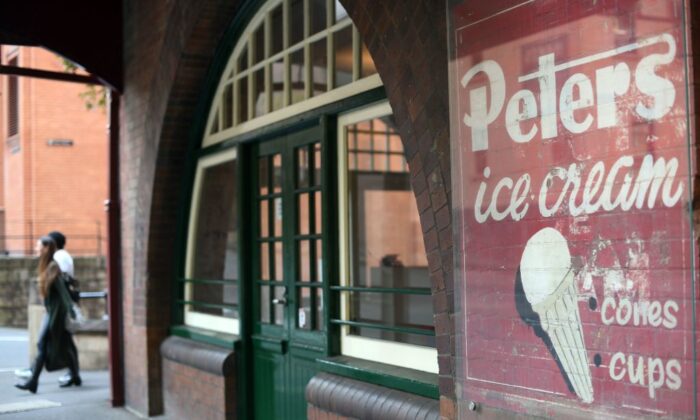 An iconic Australian brand Peters ice cream, dating back to the 19th and early 20th centuries, is seen in the central business district of Sydney on September 21, 2017. (SAEED KHAN/ Getty Images)
Australia

Ice cream giant Peters has been accused of trying to freeze out competition at service stations and convenience stores.

The national consumer and competition watchdog announced on Nov 20 it has launched federal court action against the company.

From November 2014 to December 2019, Peters is alleged to have entered into “exclusive dealing” with PFD Food Services to distribute ice cream and other frozen confectionary.

It is alleged the agreement meant other suppliers had no commercially viable way of distributing ice creams to service stations and convenience stores.

“We allege that this conduct reduced competition,” Australian Competition and Consumer Commission chair Rod Sims said in a statement.

“(The conduct) may have deprived ice cream lovers of a variety of choice or the benefit of lower prices when purchasing an ice cream at one of these stores.”

The agreement contained a condition the PFD could not distribute any competing ice cream products in certain locations around Australia.

PFD made requests to distribute competing ice creams to petrol and convenience stores but these requests were rejected by Peters, it is alleged.

The ACCC alleges a “substantial purpose” of Peters’ actions was to protect its market position from competitors.

Sims noted Peters and one other single-wrapped ice cream supplier held a market share of more than 95 per cent at the time of the allegations.

During the relevant period, Peters directly distributed most of its ice creams to Sydney, Melbourne and Brisbane, while PFD distributed or re-supplied Peters’ ice creams in the majority of other areas.

The ACCC argues it was not commercially viable for new entrants to incur the cost of establishing their own distribution network.

The watchdog is seeking declarations, pecuniary penalties, a compliance program order and costs.

Peters has told the ACCC it recently entered into a new agreement with PFD which no longer includes a term restricting PFD from distributing ice cream products for other producers.

By Ethan James in Sydney