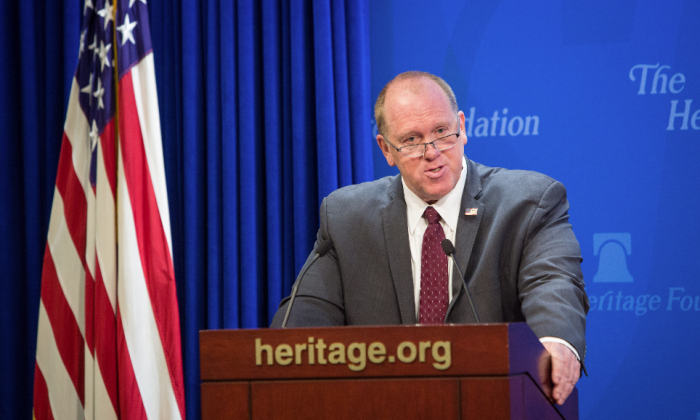 WASHINGTON—Tom Homan, deputy director for Immigration and Customs Enforcement (ICE), announced his retirement in a statement on April 30.

Homan said “the decision to leave federal service after more than 34 years is bittersweet, but my family has sacrificed a lot in order for me to serve and it’s time for me to focus on them.”

Homan has been a strong advocate for President Donald Trump’s immigration enforcement agenda and has the unenviable task of being the face of deportations.

“I am humbled and inspired by the 20,000 American patriots who serve this agency and protect our nation, increasingly in the face of unfair and false criticism from politicians and the media,” Homan said.

Homan tried to retire last year and was leaving his retirement ceremony on Jan. 27, 2017, when he got a call from then-Secretary of Homeland Security John Kelly to lead ICE.

An official from ICE said that early this year, Homan told Homeland Security leadership that he planned to retire this summer. Secretary Kirstjen Nielsen asked him to remain in his position to assist with transition planning, according to the official.

“The transition process is ongoing and there are no additional personnel announcements at this time,” the ICE official said.

Homan said he started as a Border Patrol agent in 1984.

“Then I became a special agent, I investigated organizations that smuggled aliens into this country for 20 years. And in the last eight years I was in charge of ERO [Enforcement and Removal Operations], which arrests aliens in the interior and [is responsible for] detention and removal.”

Under Homan’s leadership, deportations increased by 37 percent in fiscal year 2017.

Under the Obama administration, an illegal alien had to have a criminal conviction before ICE was allowed to place an immigration hold on them, “which means [an illegal alien] could be arrested for a serious crime and be in a county jail—we weren’t even allowed to put a detainer on them—even though they were in the country illegally and were arrested for a significant crime. That was bad,” said Homan, at a press conference on Dec. 5.

ICE’s Enforcement and Removal Operations (ERO) made 143,470 administrative arrests in fiscal year 2017, with a significant uptick beginning after Jan. 25 when Trump issued his first executive orders on immigration.

Ninety-two percent of those arrests were aliens who had a criminal conviction or a pending criminal charge, were an ICE fugitive, or had illegally re-entered the United States after deportation (a felony).

Homan has also been outspoken about sanctuary cities and has threatened to send more agents to areas that refuse to cooperate with ICE.

“When you release a public safety threat to the public, that is just foolish. It’s stupid,” Homan said.

In his retirement statement, Homan praised ICE agents for their “tremendous dedication and hard work.”

“I will continue to be a strong advocate for the workforce and for the ICE mission,” he said.