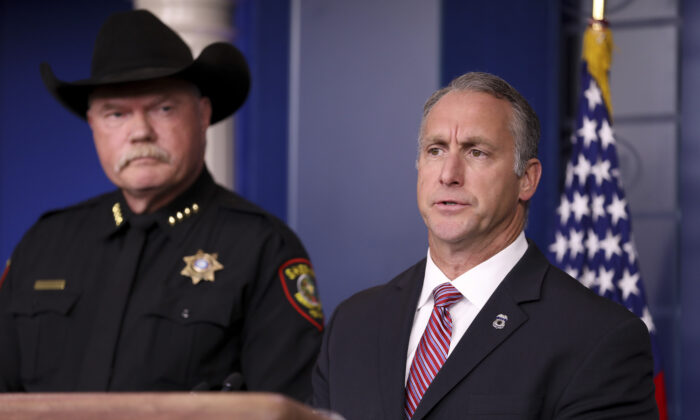 A detainer is a request to a local jail to hold an inmate for up to 48 hours longer in order for ICE to take custody. ICE issues detainers based on probable cause to believe that an individual is a removable alien, Albence said.

“Probable cause is the same legal standard that other law enforcement agencies must meet in order to make an arrest,” he said on Oct. 10.

California District Judge André Birotte Jr. issued the ruling on Sept. 27, on the premise that relying on database information alone can be unreliable and has sometimes led to the wrongful detention of American citizens.

“The result is a potential misclassification of thousands and thousands of people, potentially even millions, given the various requirements for derivation of citizenship, their dynamism, and the failure of immigration officials to adequately or properly track those changes in status,” the judge’s ruling states.

“The result, of course, is that many U.S. citizens become exposed to possible false arrest when ICE relies solely on deficient databases.”

The ACLU, which represented the plaintiffs, celebrated the decision, saying it was a landmark ruling.

“This decision is a major indictment of ICE’s dragnet deportation program, which for more than a decade has subjected citizens and non-citizens to needless unconstitutional arrests at the mere click of a button,” Jennie Pasquarella, senior staff attorney and director of immigrants’ rights for the ACLU SoCal, said in a statement on Sept. 28.

“Many times, individuals that we come across that are United States citizens don’t even know that they are, because the laws around citizenship are so complicated,” Albence said.

“The reality is we live in an electronic age where information is increasingly digitized, and evidence used to support a finding of probable cause will likely stem from databases.”

Albence said the decision, “issued by a single judge in Los Angeles, will impact at least 43 states, threatening communities far beyond the one in which this judge sits.”

“This decision will threaten public safety, as it will lead to the release of criminal aliens back onto the street—criminals that we won’t find before they hurt, or worse, more innocent victims—victims that could have been spared their pain and suffering if only ICE had been allowed to do its job.”

Albence said ICE usually finds out about an illegal alien when they’re booked into a local jail and their fingerprints are run and data recorded.

ICE made about 140,000 illegal alien arrests in fiscal 2018; 75 percent of which came from ICE working with jails and prisons. The other 25 percent were made by ICE’s at-large teams in the community.

Arrests of criminal aliens are down about 15 percent this fiscal year, Albence said, due to the redeployment of agents to assist during the border crisis.

“As much as I would like to, I cannot stand here today and promise you that dangerous criminal aliens are not being let out of jails to potentially harm others. In fact, it’s quite the opposite,” he said.

“And court decisions that negate our lawful authorities only compound this risk. To be clear, the principal beneficiaries of the recent court decision limiting ICE’s ability to use its detainer authorities are criminal aliens who have been arrested for criminal offenses by state and local jurisdictions.”

The 287(g) program allows ICE to train local jail officers to identify criminal aliens in their custody, under ICE supervision. Two counties in New Jersey—Monmouth and Cape May—currently have a 287(g) agreement with ICE.

Under the program, in May, Monmouth County officers were able to identify and place an immigration hold on a Mexican national who was charged with enticing a child, sexual assault on a child under 13, lewdness, and endangering sexual conduct with a child, according to ICE.