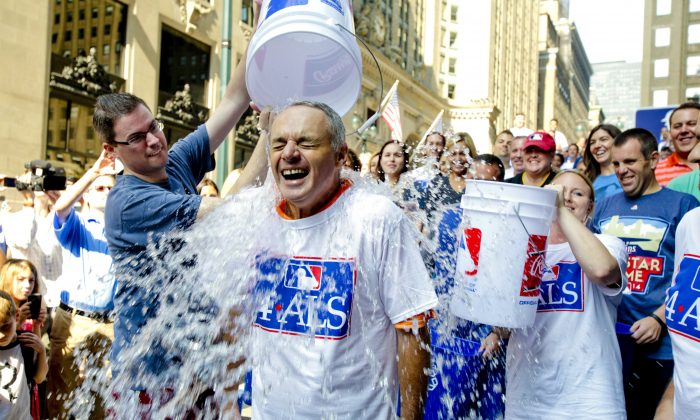 FILE - This Aug. 20, 2014 file photo shows Major League Baseball Commissioner-elect Rob Manfred participating in the ALS Ice-Bucket Challenge outside the organization's headquarters in New York. Manfred participated with more than 160 other MLB employees to raise more than $16,000 for the ALS Association. The phenomenal success of the fundraising craze is making charitable organizations rethink how they connect with a younger generation of potential donors, specifically through social media. (AP Photo/Vanessa A. Alvarez, File)
Life & Tradition

Both originated from a “satire” website called Huzlers.com. One posted last month claims a woman died 30 seconds after doing the challenge.

Another said that a boy died after having a bucket filled with water dropped on his head.

Huzlers.com has a disclaimer at the bottom of each page, saying, “Huzlers.com is a combination of real shocking news and satire news to keep its visitors in a state of disbelief.”

—Rocker Dave Grohl and his band, The Foo Fighters, spoofed the blood dump scene from the horror movie “Carrie.”

—Kermit the Frog, not to be outdone by James Franco, declared he was the first to take the ice bucketchallenge in the buff.

—Tom Cruise, who never seems to back down from a challenge, sat through not one but eight buckets of water being dumped on his head.

—Gabrielle Union tried to take the challenge wearing a shower cap to protect her hair, but someone off-camera pulls it off before she gets doused in water.

—Lindsay Lohan reached high when she took the challenge by nominating Prince Harry to join in. So far, no word from the royal.