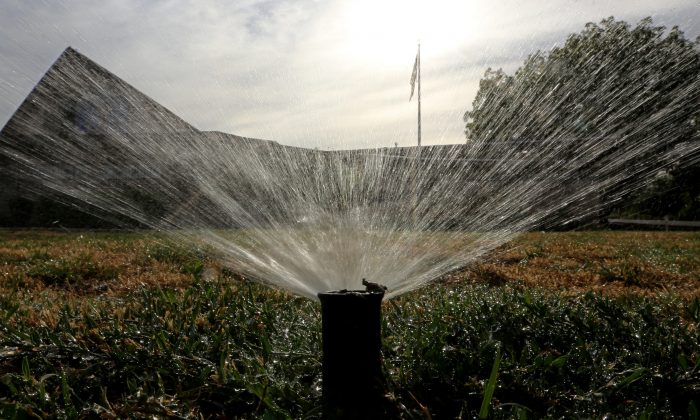 Sprinklers water a lawn Tuesday morning, July 15, in Sacramento, Calif. In an effort to force the public to conserve water, the State Water Resources Control Board voted 4–0 to approve a proposal that includes fines up to $500 a day for people who waste water on landscaping, fountains, washing vehicles, and other outdoor uses. (AP Photo/Rich Pedroncelli)
Debunk Zone

Two articles saying that the ice bucket challenge is affecting the historic drought in California are fake.

The National Report had a disclaimer, saying it’s not real. The disclaimer has since been removed.

“DISCLAIMER: National Report is a news and political satire web publication, which may or may not use real names, often in semi-real or mostly fictitious ways. All news articles contained within National Report are fiction, and presumably fake news. Any resemblance to the truth is purely coincidental . The views expressed by writers on this site are theirs alone and are not reflective of the fine journalistic and editorial integrity of National Report,” it used to read. It was saved by another site WafflesatNoon.com.

But a recent (real) article from the National Report described what the website is trying to do.

“Satire is not required to be humorous, nor was this particular post meant to be funny,” the article says. “If you are suggesting that every site that publishes fictional news have a pop-up that requires you to acknowledge the fact that what you are about to read may or may not be true, then you will need to look elsewhere for that as well. As a reminder, the most famous piece of satire in the English language, A Modest Proposal by Jonathan Swift, chose the killing and eating of children to highlight social injustice precisely because it was deplorable.”

The Daily Currant also has a disclaimer: “The Daily Currant is an English language online satirical newspaper that covers global politics, business, technology, entertainment, science, health and media. It is accessible from over 190 countries worldwide – now including South Sudan.”