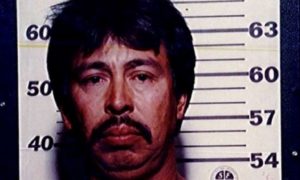 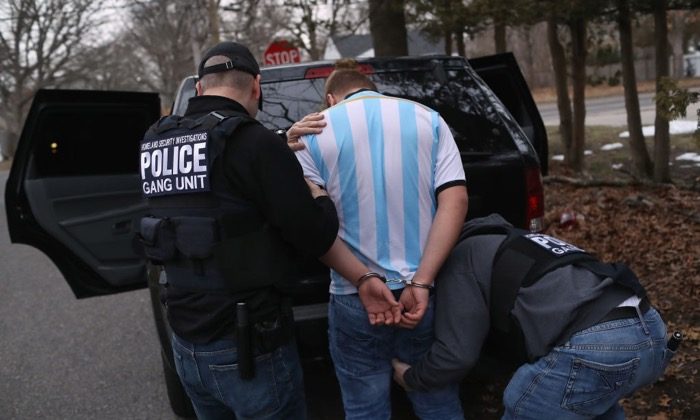 In this March 29, 2018, file photo, Immigration and Customs Enforcement (ICE) agents frisk a suspected MS-13 gang member and Honduran immigrant after arresting him at his home in Brentwood, New York. (John Moore/Getty Images)
US News

ICE Arrests Dozens of Illegal Immigrants, Some With Sex Crime Convictions, in NY

Federal immigration agents arrested more than 100 illegal aliens in New York City and the surrounding environs in an operation that netted some felons who had prior convictions for crimes including child sex crimes.

Of those arrested, more than 107 were convicted criminals or had criminal charges pending and more than 55 had been issued a final order of removal and failed to depart the United States or had been previously removed from the United States and returned illegally, according to the agency.

Several illegal aliens who were arrested had prior felony convictions for serious or violent offenses, such as child sex crimes, weapons charges, and assault.

“The success of this operation is a direct result of the full commitment of the dedicated men and women of ICE,” said Thomas Decker, field office director for the agency’s Enforcement and Removal Operations in New York, in a statement.

“In spite of the significant obstacles that ICE faces due to the dangerous policies created by local jurisdictions, which hinders the cooperation between ICE and local law enforcement, ICE will continue to devote the full efforts of our agency to protecting citizens and enforcing federal immigration law despite challenges being pursued by politically motivated individuals,” he added.

Among those arrested was a 44-year-old Ecuadorian national and registered sex offender who was convicted of attempted sexual abuse of two female victims under the age of 8.

Another was identified as a 23-year-old Dominican Republic national who has a pending charge of rape in the 3rd degree, allegedly perpetrated against a child under the age of 17.

And another was a 30-year-old Guatemalan national who was previously deported but illegally re-entered the United States. He has convictions of harassment and public lewdness.

Amid rising obstruction of federal immigration enforcement, the agency said that more than 35 of those arrested had been released from local law enforcement despite ICE placing detainers on them on suspicion that they would require deportation due to being illegal aliens.

“When law enforcement agencies fail to honor immigration detainers and release serious criminal offenders onto the streets, it undermines ICE’s ability to protect public safety and carry out its mission,” ICE stated.

“In years past, most of these individuals would have been turned over to ICE by local authorities upon their release from jail based on ICE detainers. Now that many sanctuary cities, including New York City, do not honor ICE detainers, these individuals, who often have significant criminal histories, are released onto the street, presenting a potential public safety threat,” it stated.

Many lawmakers and politicians in New York City and New York state, are increasingly moving further left politically, have criticized ICE in recent years. In April 2018, Gov. Andrew Cuomo issued a cease and desist letter to the agency, claiming that its operations “target[ed] immigrants and jeopardize[d] public safety.”

Cuomo also signed an executive order prohibiting state agencies and officers from inquiring about an individual’s immigration status unless required by law or necessary to determine eligibility for a benefit or service or disclosing information to federal immigration authorities for the purpose of civil enforcement. It also prohibited law enforcement officers from asking about immigration status unless they’re investigating illegal criminal activity.

President Donald Trump, on the other hand, has been a vocal advocate of ICE, attributing his administration’s success in battling the notorious MS-13 gang to the agency’s officers.

“We love you, we support you, we will always have your back. And I think you know that,” Trump told a crowd of around 150 law enforcement officers, lawmakers, and their families in June.

“Everyone here today understands a vital truth: American is a land of opportunity because we are a nation of laws. … For America to be a strong nation, we must have strong borders.”