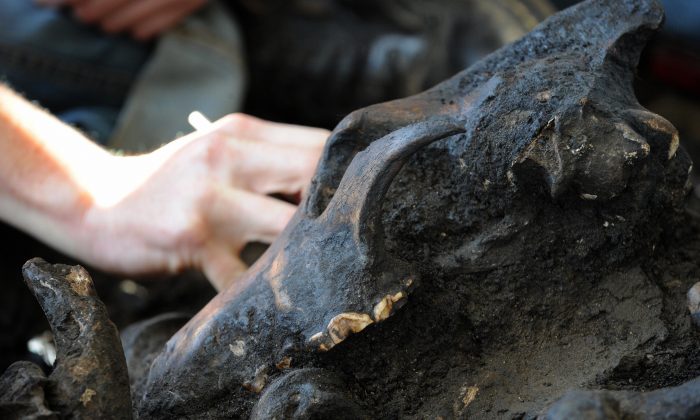 An excavator digs around a skull of an Ice Age dire wolf as she works on "Project 23," after a press conference to announce the discovery, in Los Angeles on February 18, 2009. (ROBYN BECK/AFP/Getty Images)
US

Ice age wolf skull: A hospital in western Iowa said a piece of a purported 10,000-year-old dire wolf skull was brought to their facility recently..

“It’s going to do very minimal damage, but by doing the CT scan, we’ve got an overall picture and that picture we’ll have forever. Even if something tragic would happen, we still have that data,” Titcomb said.

Titcomb told KCAU-TV that the skull was found in a quarry site that was used in the 1950s.

“The data can be used by researchers to look at brain morphology, pathologies, and to have a very detailed basically picture or map of the skull itself,” he told KCAU in explaining why a CT scan should be carried out.

The dire wolf averaged around 5 feet in length and weighed between 100 pounds and 175 pounds, meaning that the largest gray wolf of today would be comparable to an average-sized dire wolf, according to the Illinois State Museum. The teeth of the dire wolf were also a lot larger than the average gray wolf, the museum notes.

The first dire wolf specimen was found near Evansville, Ind.