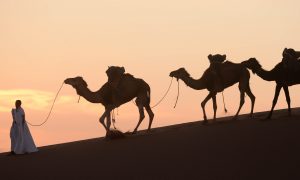 Current odds are 50/50 that the Southwest is headed for a 30-year “mega drought,” researchers say. Meanwhile, the forecast for the Pacific Northwest is continued warming with slightly drier summers and even wetter winters.

Scientists have created the first comprehensive map of the period 21,000 years ago—known as the Last Glacial Maximum—to test and improve the global climate models used to predict how precipitation patterns will change.

“Most of the previous research of the past climate in this region is based on detailed studies of specific sites,” says Jessica Oster, assistant professor of earth and environmental sciences at Vanderbilt University and primary author of the study published online in the journal Nature Geoscience.

“We combined these records to create a detailed map of past climate change in the American West. We then compared this map to computer climate models to understand what caused these changes.”

“Our previous research used field studies to understand the history of climate change in the Western US,” says study coauthor Kate Maher, assistant professor of geological and environmental sciences at Stanford University.

“It was amazing to see how our results, when combined with work of many other research groups and compared to the newest generation of climate models, revealed a consistent story about how rainfall patterns were altered in the past.”

One of the reasons the researchers picked this region to map is because the mid-latitudes, in general, and the western United States, in particular, are regions where the climate models tend to disagree on the magnitude and, in some cases, even the direction that precipitation patterns will change in the future.

“This is a transition zone. There are strong competing effects such as changes in the large-scale atmospheric circulation, sea surface temperature changes like El Niño and La Niña and the dynamics of westerly storm tracks that all interact at the mid-latitudes,” says coauthor Matthew Winnick, who contributed to the study along with fellow Stanford doctoral student Daniel Ibarra.

“As a result, understanding the exact nature of how these different effects express themselves to form the north/south transition zone will be extremely important for freshwater resource management in major population centers across the Western US.”

Of course, there aren’t any direct records of precipitation levels thousands of years ago. So climate scientists rely on indirect means, called proxies, to reconstruct past variations in precipitation patterns.

In this case, researchers combined records of ancient lake levels, location and extent of glaciation, variations in the composition of stalagmites in caves, and evidence for changes in vegetation and subsurface soil deposits associated with water table depth. One of the smelliest proxies that they used is pollen preserved in ancient packrat middens.

However, there was also conflicting evidence of drier conditions at some sites in Utah and Colorado and of wetter conditions in Idaho and Montana.

This explains the drier conditions in Utah and Colorado. The new analysis also found that the wetter sites in the north were situated next to large inland lakes that existed at the time, so they attribute them to local, lake effects.

Two basic theories have been advanced to explain the dramatically different rainfall patterns of the period:

A comparison of the new results with the output of a number of climate models shows that several of the newer models that have higher resolution and use updated ice sheet configurations do “a very good job” of reproducing the patterns observed in the proxy records.

“According to these models, it is the high pressure cells that are really important in steering winter storms, and in determining the shape and location of the transition zone,” Oster says.

“Some models do hint at an increase in subtropical winter moisture, but we don’t see evidence of an enhanced summer monsoon.”

Given the prospect of continued global warming, there is no chance that this ancient weather pattern will return in foreseeable future.