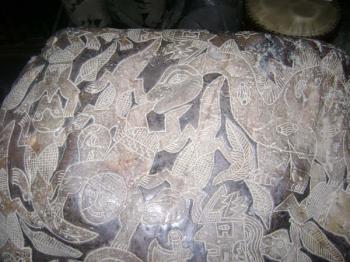 OBSERVING A COMET: This Ica Stone depicts a person wearing a headdress, observing a comet through a telescope. (Courtesy of Eugenia Cabrera/Museo Cabrera)
Beyond Science

ICA, Peru—At first sight, the small Peruvian town of Ica, situated in the Nazca Desert about 5 hours by bus from Lima, has nothing extraordinary to offer. But after one step into Museo Cabrera, a museum that houses engraved stones of Ica, a different world emerges.

Over 10,000 stones of varying sizes fill the museum. They all have a black, smooth surface on which figures are engraved. Lifting them, you would find them much heavier than everyday stones of similar size.

Dr. Javier Cabrera Darquea, who collected and studied the stones for 37 years, got a small stone as a gift for his birthday. Surprised by its weight and design, he started collecting and studying the stones.

Eugenia Cabrera C., director of the museum and daughter of Dr. Cabrera, said that her father conducted an analysis on the stones and found that they are a common type of rock called andesite, coated with a special layer on the surface, which made them black and smooth and probably gave them the extra weight.

He speculated that the layer may have been soft at first, which allowed people to draw the figures on it, and later became hard. To this day, the coating is still on the stones, allowing us to see the figures.

Messages on the Stones

On the stones are drawings of human figures, plants, animals, and abstract symbols. The humans are wearing headdresses, clothes, and shoes. Some stones depict scenes similar to today’s blood transfusions, organ transplants, and birth through caesarian section. Several stones show people with a telescope observing star constellations, planets, and comets.

The animals resemble cows, deer, and giraffes, among others. Some also resemble trilobites, extinct fish, and other animals with which we are not familiar. Most surprisingly, several stones show humans trying to kill, or being eaten by, dinosaurs.

Dr. Dennis Swift, who studied archeology at the University of New Mexico, documented in his book Secrets of the Ica Stones and Nazca Lines evidence that the stones date back to Pre-Columbian times.

Based on the drawings’ content, some believe that the stones are from 65 million years ago, before dinosaurs became extinct, and that there were people existing at that time—the ones who produced the stones.

Because the drawings of dinosaurs were considered inaccurate, scientists thought it impossible that the stones were produced by people 65 million years ago. However, it was later discovered that dinosaurs actually walked without their tails touching the ground. “Now we know the paleontologists were wrong. The Ica Stones were right,” wrote Swift.

Not as Simple as Drawings

Dr. Cabrera understood the Ica Stones as a library, with each stone being a book or a page of a book documenting the past. Important things were drawn on big stones, and less important matters drawn on smaller stones.

Ms. Cabrera further elaborates her father’s understanding: “They [the people who made the stones] were transmitting not just simple drawings of certain moments, but they were transmitting a type of language based on drawings.”

Through his research, Dr. Cabrera came to believe that leaves meant lives, and sets of leaves meant civilizations. As for the headdresses that the people in the drawings are wearing, Dr. Cabrera thought they symbolized intelligence, so wise men were drawn with headdresses.