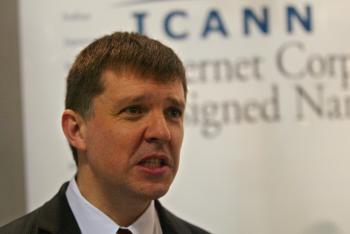 In this file photo, Internet Corporation for Assigned Names and Numbers (Icann) CEO Paul Twomey answers a visitor's question at the Icann stand of the World Summit on the Internet Society (WSIS). Icann has approved non-Latin languages for use in domain na (Abdelhak Senna/AFP/Getty Images)
News

By Peter Sedik
Print
During a six-day conference in Seoul, Internet regulator Icann approved a plan to allow domain names to be written in non-Latin characters such as Chinese, Hebrew, Arabic or Russian.

Since the beginning of the World Wide Web, only the 26 Roman characters A-Z, numbers and the dash sign could be used in a website name. Under the new rules, which are projected to go into effect by mid-2010, domain names can now choose from among 100,000 different characters.

"Of the 1.6 billion internet users today worldwide, more than half use languages that have scripts that are not Latin-based," said Icann president and CEO Rod Beckstrom.

In the first stage of the plan, the local alphabet will be used only in national top-level domains—such as .sk for Slovakia or .ru for Russia. Later stages of the plan will internationalize the major domains like .com, .net and .org as well.

Internationalized Domain Names (IDNs) will present the “biggest technical change to the Internet,” Icann Chairman Peter Dengate Thrush said in a statement. Starting November 16, countries can apply for a new top-level domain based on their own character set.

While countries like China and Thailand have previously introduced systems that allow users to enter domain names in their own languages, they did not have international approval.

Seeing the need for a new internationally approved domain name system, Icann went forward with the plan just one month after gaining autonomy from the U.S. government.

However, this revolutionary plan has met with mixed reactions from the Internet community. Many have worries of new security concerns, since the internationalization system might be used for possible phishing attacks.

For example, potential victims may receive an address for a fake website, whose name will be visually indistinguishable from the legal site, with just one letter taken from another character set.

Other complaints come from business owners from non-English speaking countries that may now need to register at least two domain addresses—one with the special characters, and another without.